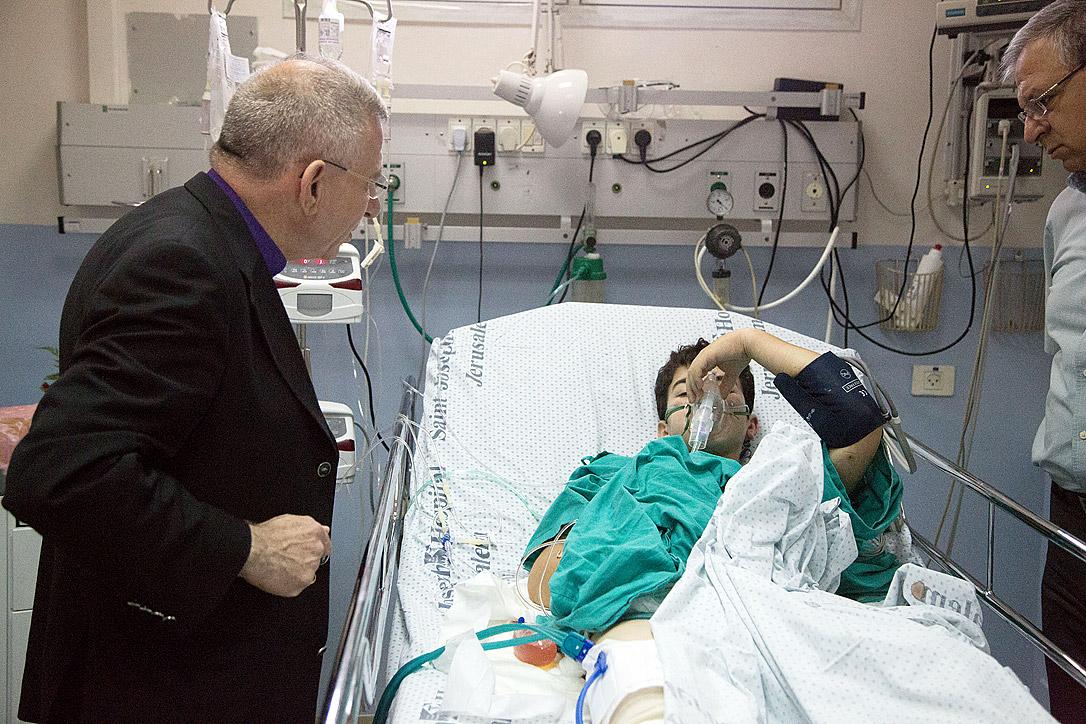 (LWI) – As the number of civilians caught in the conflict between Israel and Hamas increases, the Holy Land Lutheran Bishop Dr Munib A. Younan and representatives of church organizations in Jerusalem consoled patients seeking treatment at the Augusta Victoria Hospital (AVH) and other hospitals caring for the conflict-injured from Gaza.

"We pray that God will give them healing, for all people, since it is our responsibility to care for all who are hurting. I told the patients to continue in their faith and to trust God, who is a God of love. We pray that justice will prevail in this country," Younan said after 1 August visit to wounded children, men and women who have been brought to Jerusalem hospitals in recent days.

The Lutheran World Federation (LWF)-run AVH is among hospitals in East Jerusalem that have increased their capacity to support health institutions in Gaza, which are overwhelmed by the increasing number of casualties from the ongoing conflict.

In addition to its healthcare services including specialized treatment at its cancer, diabetes and pediatric centers, AVH has recently set up a special ward for the injured from Gaza. It has also dispatched a team of four doctors and seven nurses along with medical supplies to the Al-Shifa Hospital in Gaza to provide additional support in patient care, and another team of volunteers is preparing to leave soon.

“Sending the medical teams to Gaza is part of the hospital’s service to the Gaza Strip. This action comes in response to the extreme needs identified by the medical staff in Gaza and rises out of AVH’s determination to serve the injured due to the Israeli shelling and bombing,” said AVH Chief Executive Officer Dr Tawfiq Nasser. The conflict’s impact is evident in the pain and agony of patients arriving at AVH, Nasser said.

He added that reports from Gaza indicate that many people have sought refuge at hospital grounds in the Gaza Strip, as these are considered to be the safest places in the city. As people keep arriving, the grounds fill up with tents and make-shift shelters, adding more pressure to the hospitals’ capacity.

Younan, who is also LWF president, said the Evangelical Lutheran Church in Jordan and the Holy Land (ELCJHL) will continue “to pray for all people who are victims of this war. We continue to call for a ceasefire anchored in an end to the siege and a peace process,” he said, reiterating recent calls by both the LWF and ELCJHL

During the visit to Jerusalem hospitals, the ELCJHL bishop was accompanied by delegates from the Caritas Hospital, Pontifical Mission, Apostolic Delegate, Catholic Relief Services and the Jerusalem Inter-Church Center that represents both the World Council of Churches and the Middle East Council of Churches.