An assembly the communion remembers with gratitude 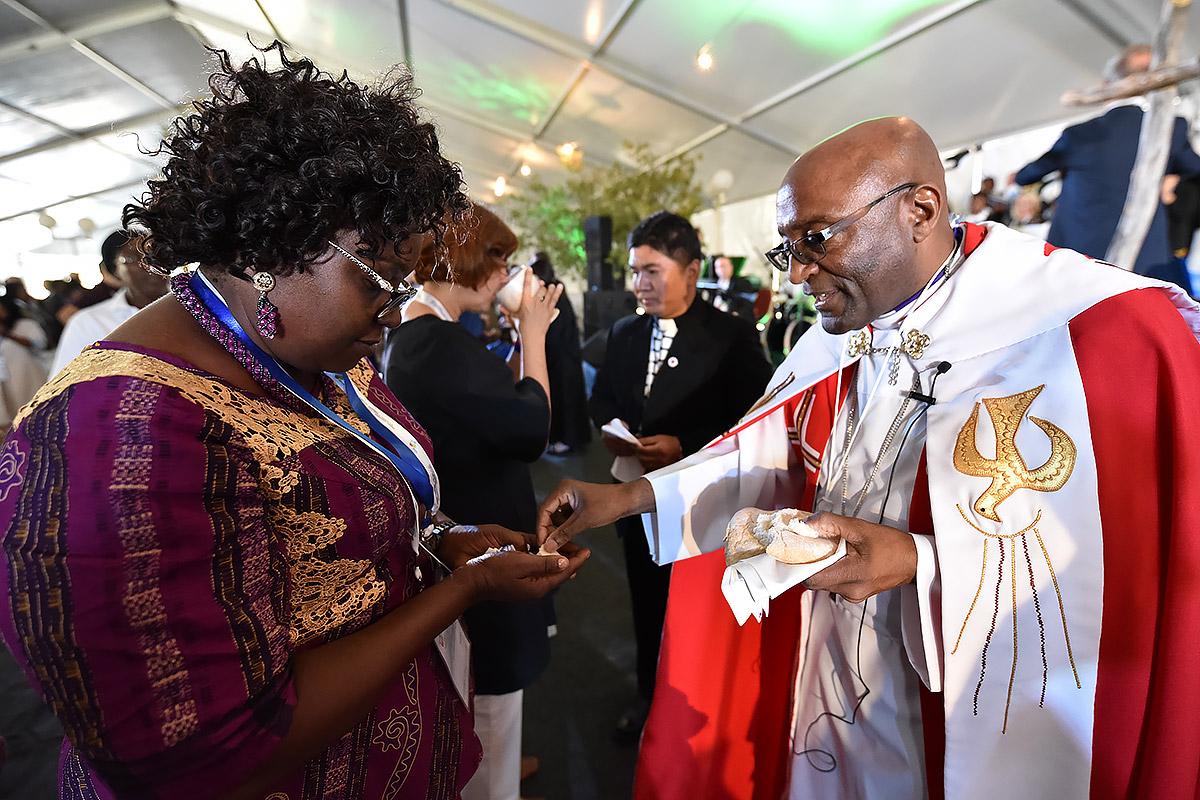 10 May 2017, Windhoek, Namibia: Bishop Ernst Gamxamub from the Evangelical Lutheran Church in the Republic of Namibia distributes bread during Holy Communion at the opening worship of the Lutheran World Federation's Twelfth Assembly. Photo: LWF/Albin Hillert

Looking back to the Twelfth LWF Assembly in Windhoek, Namibia

More than 800 delegates, advisors, and guests attended the Assembly which is the LWF’s highest decision-making body. Under the theme “Liberated by God’s Grace,” participants met from 10-16 May 2017 to worship together, determine the future direction of the LWF, share experiences about issues facing their churches, and express their call into communion while embracing rich diversity.

“The assembly in Namibia is one the communion wants to remember!” the General Secretary of the Lutheran World Federation (LWF), Rev Dr Martin Junge, wrote in a letter to the Namibian member churches who hosted the assembly.

“We in the communion office have been working to take up the many good impulses the assembly provided for our common journey as a communion and are seeking to respond to the directions that it offered for our witness in the world,” the LWF General Secretary, Rev Dr Martin Junge, wrote.

Assembly resolutions and discussions are feeding into the new LWF strategy, which is being prepared and will be presented for adoption at the Council in June. “Theological education and formation has been part of it, as is the desire of the communion to play a more prominent role against climate change,” Junge continues in the letter, mentioning also gender justice, youth participation, ecumenical dialogue and humanitarian and development assistance.

“Often our thoughts have gone to you and your churches, and we continue praying for you as their leaders, and for the churches’ witness of the liberating grace of God.”

The LWF General Secretary thanked the three LWF member churches in Namibia for their role in preparing and hosting the meeting. “Often our thoughts have gone to you and your churches, and we continue praying for you as their leaders, and for the churches’ witness of the liberating grace of God,” he writes.

The three churches played a vital role in the daily worship at the Assembly, which was enriched by the participation of local choirs from Lutheran parishes in Namibia. Songs and prayers from the assembly, some of whom were written for the event, are now being used by Lutheran churches in the entire communion.

The LWF General Secretary affirmed the LWF’s pledge to “continue praying and walking with the people and the churches of Namibia, seeking to come to terms with the painful history of colonial past.” He reiterated the communion’s offer to support local processes of seeking justice and reconciliation. The assembly addressed the reconciliation process in a public statement on reconciliation with respect to the genocide in Namibia, and offered the LWF’s support and accompaniment.

Presentations, sermons, keynote speeches, resolutions, and statements can be read in the assembly report, which is available in the four official LWF languages.