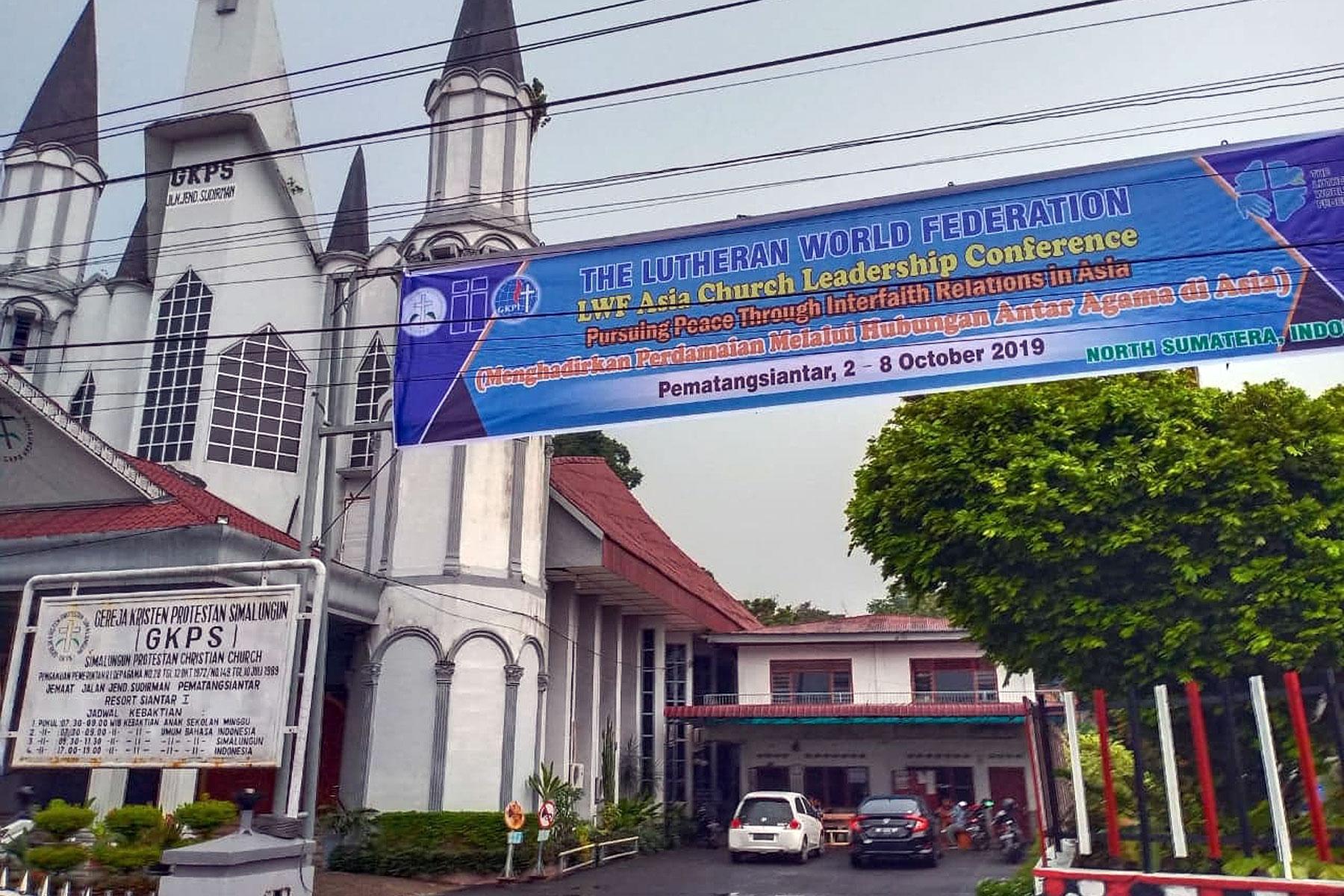 Welcome banner outside the Simalungun Protestant Christian Church in Pematang Siantar in North Sumatra, where participants at the 2 -8 October Asia Church Leadership Conference will gather for Sunday worship. Photo: B. Nahampun

(LWI) - ‘Pursuing Peace through Interfaith Relations’ is the theme of the Asia Church Leadership Conference (ACLC) which opens in the Indonesian city of Pematang Siantar on 2 October. Though the archipelago is well known as the nation with the world’s largest Muslim population, at least half of the inhabitants of this city, in the province of North Sumatra, are Christian, largely a legacy of Lutheran and Dutch Reformed missionary activities during previous centuries.

A recent survey also showed the town to be one of the most tolerant places in the country, with high levels of freedom for worship and participation in the life of the church. The 200 ordained and lay delegates at the meeting, women and men, from across the Asian region, “look forward to learning from local leaders about dialogue and peacebuilding efforts,” said Lutheran World Federation (LWF) Asia Secretary Rev. Dr Philip Lok.

Pancasila as basis for peace

A keynote speaker will be the special envoy of the President of the Republic of Indonesia, Professor Syafiq Mughni, whose words will focus on ‘Pancasila’ (the five founding principles of the nation) as the basis for peaceful coexistence. He’s also expected to stress that despite its overwhelming Muslim majority, Indonesia is a secular state whose government recognizes 5 other faith groups – Protestants, Catholics, Buddhists, Hindus and followers of Confucianism. Leaders of all those religious communities have been invited to attend the session.

Overall, Christians number about 10 percent of Indonesia’s population, with around 7 percent belonging to the different Protestant churches. The Gospel was first brought to North Sumatra by a German Lutheran missionary, Ludwig Ingwer Nommensen, commonly called the apostle of the ethnic Batak people and founder of the Batak Christian Protestant Church (HKBP).

Today the HKBP numbers around four million faithful and is the largest of the 13 churches in the country that belong to the LWF. Three of them – the Simalungun Protestant Christian Church (GKPS), the Christian Protestant Church in Indonesia (GKPI) and The Indonesian Christian Church (HKI) - are hosting the six-day meeting, which opens with a worship service at the HKI headquarters.

Participants gather “to reflect on how Lutheran churches can work together with other faith communities to be conduits of peace.”

Since delegates come from countries as diverse as Australia, Hong Kong, the Holy Land, India, Malaysia or Myanmar, their experiences of interreligious relations will vary enormously. “With religious and racial tensions spreading fast,” said Rev. Lok, participants gather “to reflect on how Lutheran churches can work together with other faith communities to be conduits of peace.

This biennial ACLC includes the recommended LWF quotas of 40 percent women and 20 percent youth delegates, an important first step towards more meaningful participation at all levels of church leadership. Women from across the region gathered for a preparatory meeting to discuss ways of combating inequality and implementing gender justice in the church and in society.

Ahead of the meeting, the LWF’s Global Young Reformers Network 2.0 also held its own gathering, sharing experiences and focusing on practical ways of reaching out to their peers in their different multicultural and interreligious Asian contexts. High on their agenda were questions of how to engage youth through contemporary liturgy, how to provide better education in the faith for young people of all ages and how to ensure the voices of youth are heard clearly at leadership level.

Like the youth delegates, the ACLC leaders are coming to learn from each other’s experiences and strengthen relations between churches in the region. “We hope that the church leaders will have renewed confidence that they are not alone as they face common challenges and understand how the global communion of churches can be stronger when we stand together,” said Rev Philip Lok.

Junge to Asian churches: Peace-building is our only choice
news