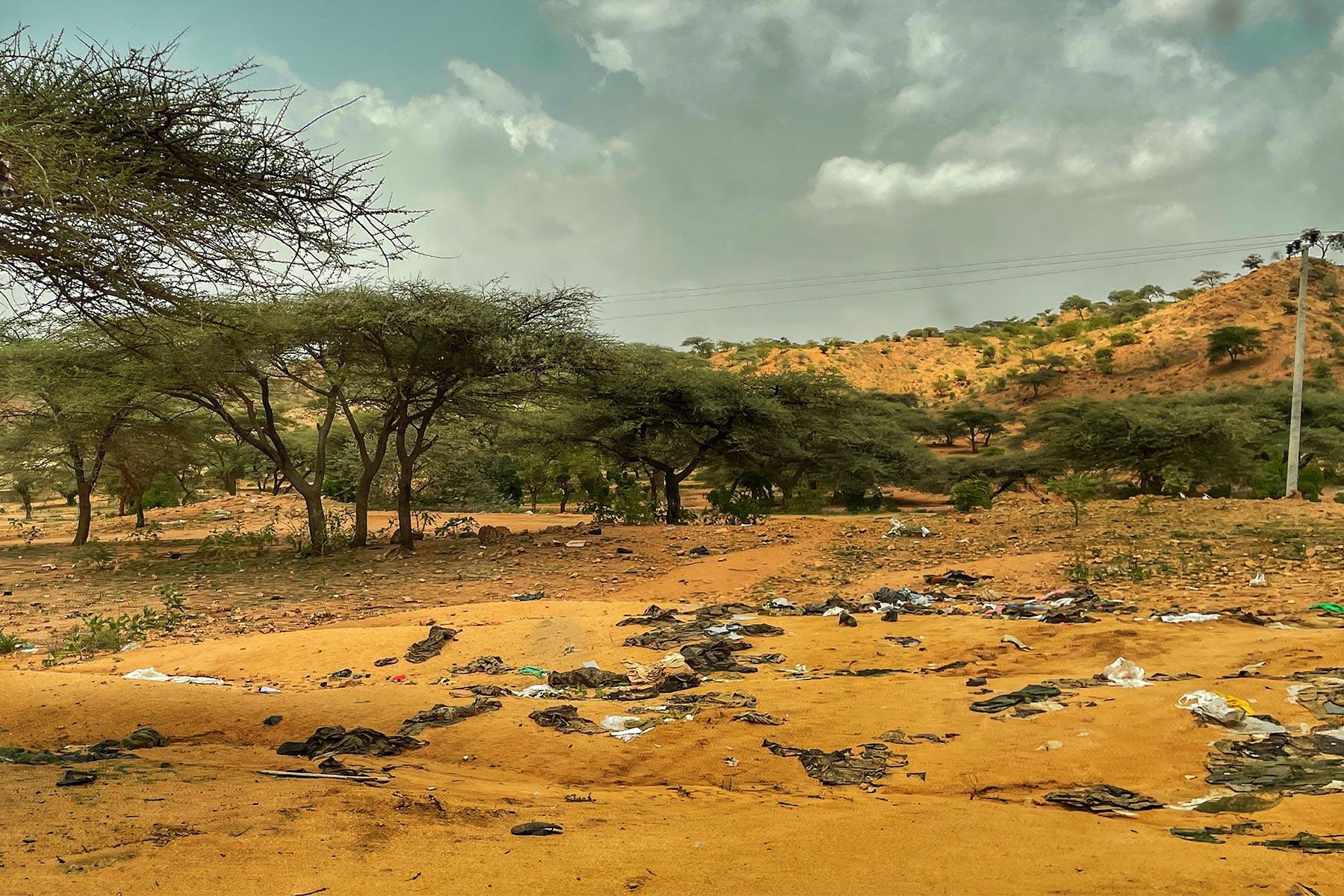 Debris from heavy fighting near the town of Yechilla litters the banks of a river which is a primary water source for local residents. Aid agencies are calling for urgent access to bring clean water, food and medical supplies into the war-torn region. Photo: LWF/A. Calma

(LWI) - Time is running out to prevent a looming famine in Ethiopia’s Tigray region, where an estimated 5.2 million people are facing acute food insecurity. Members of a joint United Nations and non-governmental organizations team have returned from the war-torn region warning that their operations will be halted within two weeks unless essential services such as banking, communications and road access to vulnerable people can be restored. The Lutheran World Federation (LWF) joined humanitarian and development partners in a visit to the northern Tigray region and surrounding areas from 5 to 12 July.

The main aim of the visit was to assess the deepening humanitarian crisis which has been unfolding since fighting broke out last November between the Tigray People’s Liberation Front (TPLF) and forces from the Ethiopian and Eritrean governments. Hundreds of thousands of people are displaced within Tigray and neighboring Afar and Amhara regions, while over 60,000 have crossed the border into Sudan.

All flights into the region have been suspended, while all communications lines are down and travel by land is extremely difficult. In June, three United Nations agencies, the Children’s Fund (UNICEF), the Food and Agriculture Organization (FAO) and the World Food Programme (WFP) appealed for urgent action and unimpeded access to people in the region, saying “the risk of famine is imminent, unless food, livelihood assistance and other life-saving interventions” can be scaled up and hostilities cease.

There is an urgent need to get food, medical supplies and access to clean drinking water to those most affected by the conflict.

LWF’s Global Humanitarian Coordinator Allan Calma, who took part in the visit, said the team witnessed firsthand the devastating impact of the fighting in some towns and villages, with rivers contaminated, increasing the risk of cholera and other water borne diseases. “We saw severe damage to a local hospital and also to a school where internally displaced people (IDPs) had been sheltering,” he said.

“There is an urgent need to get food, medical supplies and access to clean drinking water to those most affected by the conflict,” Calma continued, noting that the vast majority of IDPs in the region are women and children. In order to do this, he said, roads must be cleared, essential services restored and protection for people guaranteed. “The planting season would normally be taking place between now and September, but if farmers cannot plant crops, we will continue to see rising levels of malnutrition over the coming months,” he added.

There have also been widespread reports of rape and killing of civilians since the conflict erupted. At least 12 aid workers have died in Tigray since November, including a Spanish and an Ethiopian doctor from Médecins sans Frontières, whose bodies were found on 25 June, alongside that of their Ethiopian driver. “It is vital for the international community to mount a coordinated humanitarian response,” Calma said, “providing protection as well as emergency aid to those most in need.”

In partnership with the Development and Social Services Commission (DASSC) of the Ethiopian Evangelical Church Mekane Yesus and other faith-based organizations in the region, LWF is providing water and sanitation (WASH), relief items such as cooking equipment, soap, masks, and other items to prevent the spread of COVID-19, as well as livelihood support, protection, and peacebuilding services in Tigray.