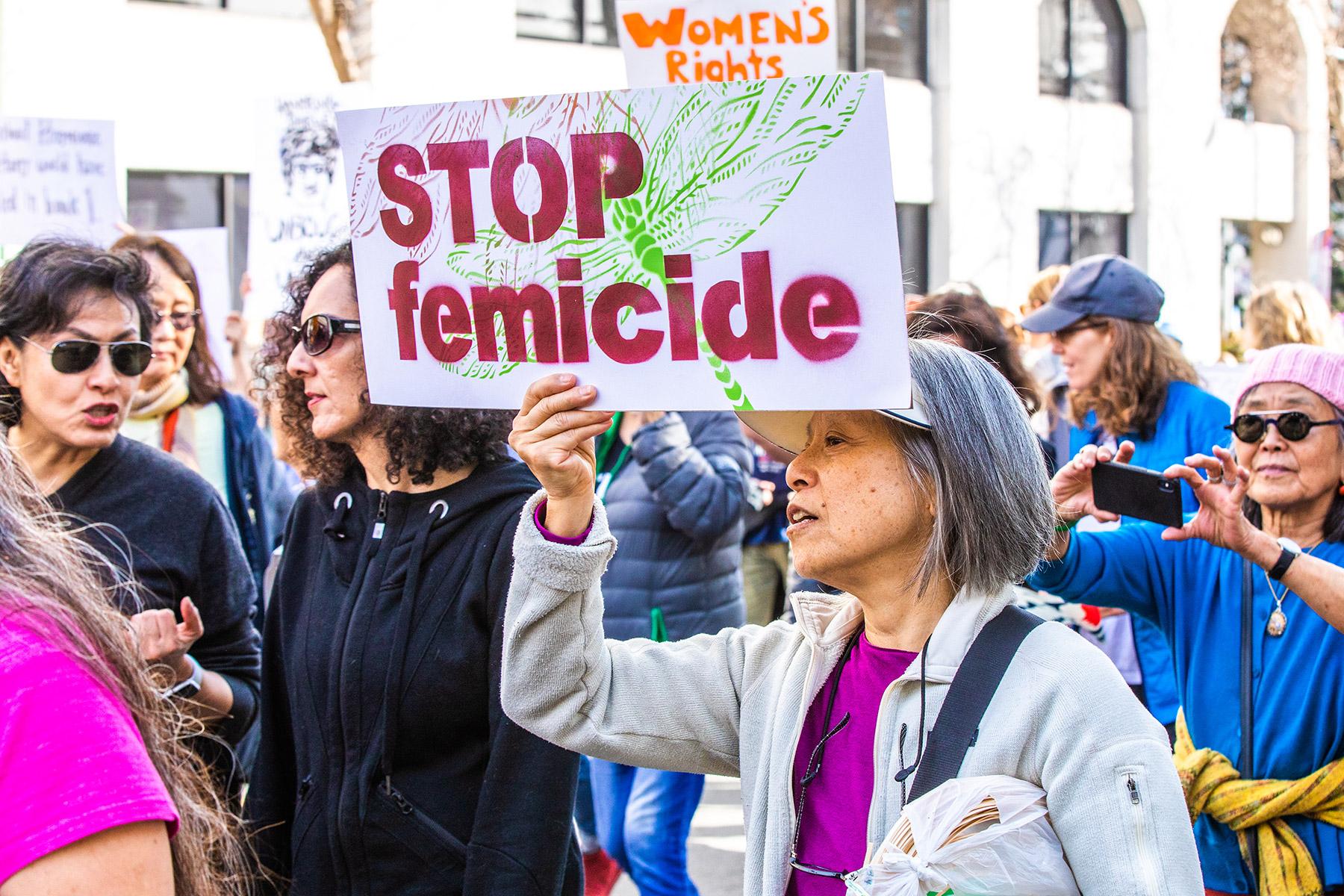 Participants at a women's march in Oakland in 2019. Photo: Thomas Hawk (CC-BY-NC)

(LWI) - The dramatic plight of women and girls who end up ‘Missing and Murdered’ was under the spotlight during two webinars organized in the context of the 16 Days of activism to end gender-based violence. The Lutheran World Federation (LWF) partnered with the World Council of Churches (WCC), ACT Alliance and the Young Women’s Christian Association (YWCA) to ask what the churches can do to prevent the rising crime of femicide.

The two-part event focused on different areas of the world, presenting first-hand testimony from panelists working with women and girls who have been trafficked, abused or forced to flee their homes in fear of their lives. Among those speaking about the problem in Indonesia on 25 November was Faye Simanjuntek, a young Lutheran activist who set up her own safe house called Rumah Faye for sexually abused children. Noting that the center cares for trafficked victims as young as six, she spoke of the work to empower survivors through reproductive health education, as well as creative skills training including art and cooking workshops.

Simanjuntek also addressed the underlying cultural problems that allow violence against women and girls to thrive in her country, citing recent comments from a police chief who said wives should be confined to the “well (fetching water), the kitchen and the sheets.” Though Indonesia is a vast and diverse country, she said, women are largely viewed as “second-class participants” in family and public affairs.

Rev. Emmanuel Gabriel, Nigeria’s national coordinator of the LWF’s Symbols of Hope project, spoke about the work to support and reintegrate survivors of trafficking through psycho-social counselling and livelihoods activities. Women are the most vulnerable to exploitation in his country, he noted, often because of gender-based violence in their communities which motivates them to migrate and fall victim to the traffickers. Churches must be part of the solution, he said, raising awareness of the dangers and advocating for a bible-based approach to gender equality.

Another Nigerian panelist, Rev. Dr Kehinde Babarinde, adjunct lecturer at West Africa Theological Seminary, addressed the issue of ritual killings of women whose body parts are believed to possess mystical powers to bring prosperity to others. He said the church must speak out against this and other abuses such as widow inheritance, where women can be forced to marry another family member following the death of their husbands. Many women prefer to commit suicide, he noted, stressing that this must be recognized as a form of femicide too.

Speaking about the widespread violence and killings of women in the Pacific region, Stephanie Dunn of the Fiji Women’s Crisis Center said churches have at times reinforced the problems of a patriarchal culture which create barriers to prevent women from coming forward to denounce the perpetrators of violence. While global statistics show one in every three women has suffered from intimate partner sexual violence, in Fiji and the Pacific, she said, that figure rises to two out of every three women experience gender-based violence.

South African Catholic theologian Nontando Hadebe, international coordinator of the faith-based gender justice network Side by Side, spoke of the interconnected legacies of patriarchy, colonialism and apartheid in her country. Women, she said, are still “socialized to be submissive” and the church must do more to highlight positive role models of women in the bible.

Frantseska Altezini, a lawyer working with the YWCA in Greece, spoke of the way that the COVID-19 pandemic and the recent economic crisis have brought the underlying problems that women face into the spotlight. She and other participants stressed the need to teach children gender justice in schools, as well as developing curricula for theological institutions in order to “build a gender-competent church.”

A second webinar on 2 December highlighted the scale of this ‘shadow pandemic’ of gender-based violence in Latin America, North America and the Caribbean. Valéria Vilhena, a researcher with Mulheres EIG (Women Evangelicals for Gender Equality) highlighted the work that organization has been doing since 2015 to support survivors and their families. Her country, Brazil, ranks fifth in the world for the highest levels of femicide after El Salvador, Colombia, Guatemala and Russia, she said.

Protecting the most vulnerable

Dr Imani Ama, a research fellow at the University of the West Indies, spoke of the challenges of “indifference and impunity” for perpetrators in Jamaica where the “subordination of women is normative.” Easy access to guns and a “de-sensitization to the value of life” have helped to rank Jamaica “among the murder capitals of the world,” she said. Demilitarization and de-colonialization are necessary, alongside “theologies to dismantle patriarchy,’” she added.

Ebony Rempel, chief executive officer of the YWCA in Banff, Canada, spoke of the increased threats facing indigenous women and girls who are seven times more likely to be victims of femicide. Her organization runs an emergency shelter, as well as longer terms support and affordable housing for survivors of domestic violence. Their crisis helpline has seen a 71% increase in calls during the pandemic, she said, with trans women also running higher risks of femicide.

In conclusion, First Nations Cree artist Amanda Wallin shared her experience of supporting two daughters who were on the Missing Persons’ list in Winnipeg, Manitoba, the province with the highest femicide rate in Canada. She spoke of the pain of witnessing her daughters in abusive relationships, saying there is a need for greater legislative efforts to protect women from violence and femicide, especially among the indigenous communities.