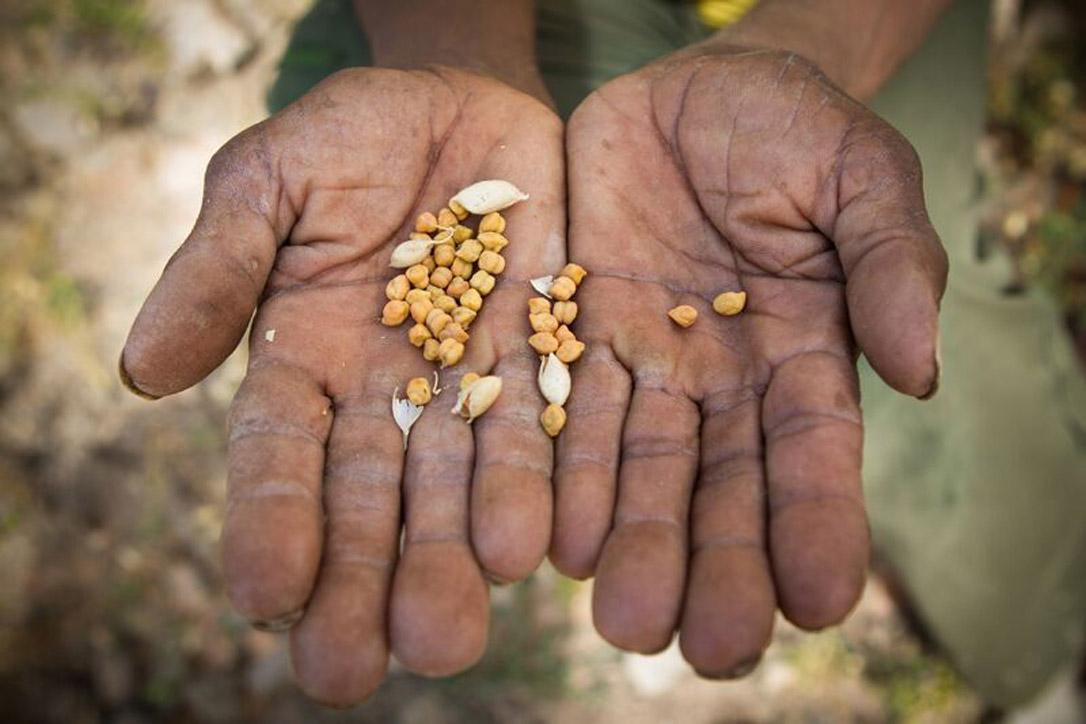 (LWI) – More than ten million people in Ethiopia need food assistance as the country faces the worst drought in 30 years.

The Lutheran World Federation (LWF) is supporting affected communities in several states in the country.

“This is the worst I have seen,” said Woday Gelaye, 75, who has been farming in this area for over 60 years.

“Because of the recurrent drought and the heavy, short rainy season even this chickpea crop has been put back.” Extending his hand he shows a few tiny chickpea pulses. The seeds did not yield enough to feed his family. The farmer had to sell his ox to buy additional food for his wife, eight children and four grandchildren. Now he no longer has the animal to plough his other two small fields - and nothing left to sell.

Like Gelaye, millions of Ethiopian farmers have reached the end of their energy and resources. “Since both the failed spring and summer rains – called belg and meher in Ethiopia - in 2015, over 10.2 million Ethiopians are in need of emergency aid,” LWF Country Representative Sophia Gebreyes says. “The situation is very critical. The belg rainy season should be starting soon, but the usual signs of its arrival are missing.”

The current emerging food security crisis in Ethiopia is the result of the pre-El Niño failure of the spring rains and the El Niño induced late onset, erratic and early cessation of the main summer rains.  Nearly 6 million of the people affected are children. 400,000 livestock deaths were reported so far, an estimated 2 million Ethiopians are without safe drinking water.

The situation is critical. The belg rainy season should be starting soon, but the usual signs of its arrival are missing.

LWF Ethiopia has been working in Ethiopia for 43 years and is operating in many of the areas where the drought has hit people the hardest. In Lalibela district, LWF supports farmers with a Food Security and Livelihood project. In Bale they have been conducting a resilience project.

Gelaye together with other farmers has benefitted from the LWF Emergency Seed program. After the failure of his crops earlier in the season the LWF provided him with 31kg of seeds.  In 2014, LWF launched the Food Security Project supported by CLWR, which is teaching farmers agricultural techniques to improve the harvest and deal with climate change. One of the people participating from the start is Shamble, who was now able to harvest his first crop and even sell some surplus. “Farmers who have been part of these projects and who used the irrigation techniques taught there have been dealing much better with the drought than others. Projects like these can cushion people even is extremely difficult times like the El Nino year,” Gebreyes says.

While the project has helped its more than 4,600 beneficiaries to prepare for the current emergency, much more help will be needed to avert the impending catastrophe. Together with the ACT Alliance LWF Ethiopia has launched an appeal to support people in Ethiopia with initiatives to close food and income gaps such as the “cash for work” program which will be implemented in four regions, so-called hotspots in East Harraghe.

“People and livestock are on the brink of starvation,” Gebreyes warns. “If it does not rain, the situation will be catastrophic.”

More than ten million people in Ethiopia are in danger of starvation as the country faces the worst drought in 30 years. Unofficial sources claim that 15 million people, more than half of them children, will need food assistance to survive the coming months. The Lutheran World Federation (LWF) is supporting affected communities in several states in the country.

Those most affected are the small scale farmers. Many had had bad harvests due to too little rain last year. They had to sell their precious livestock to buy food. Even if the spring rains should come this year, they would not have any means to plow and sow their fields. LWF is teaching new farming techniques and providing emergency food and seeds to help people in this difficult time. 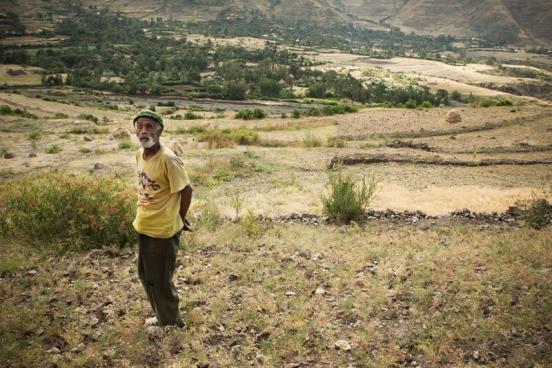 Woday Gelaye has not seen a drought this bad in his entire life. The farmer had to sell his oxen to feed his large family. 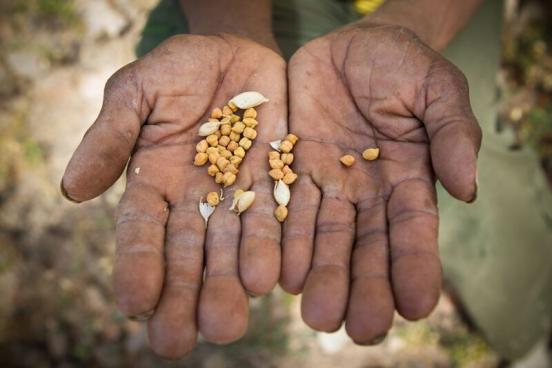 Mr Gelaye’s chickpea harvest. The failing spring and irregular summer rains have caused a much smaller yield and tiny fruit. 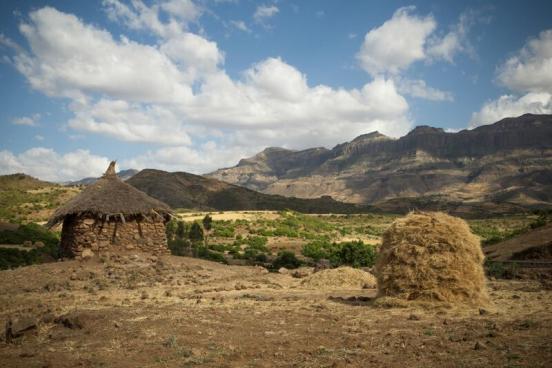 Like them, many farmers are left with literally nothing. Debre and Baye, who live here with a small child, now think about migrating and even leaving the country. 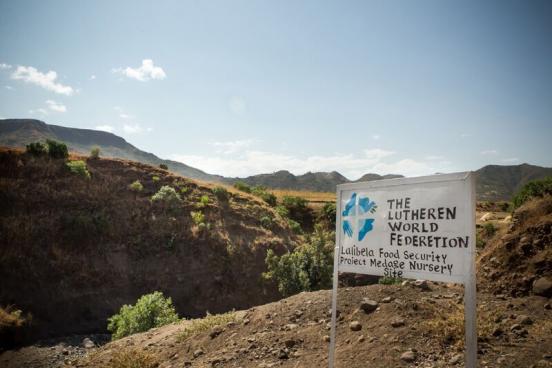 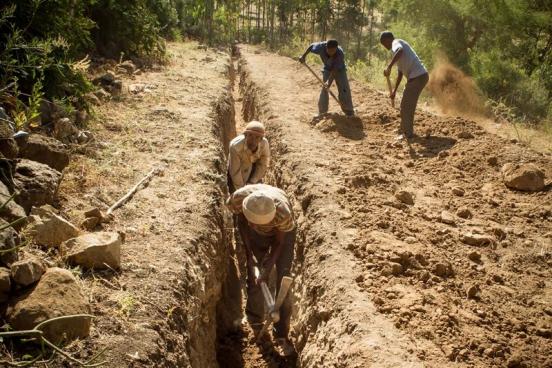 A part of the food security project was teaching new irrigation techniques. Villagers have built irrigation trenches to conserve moisture. 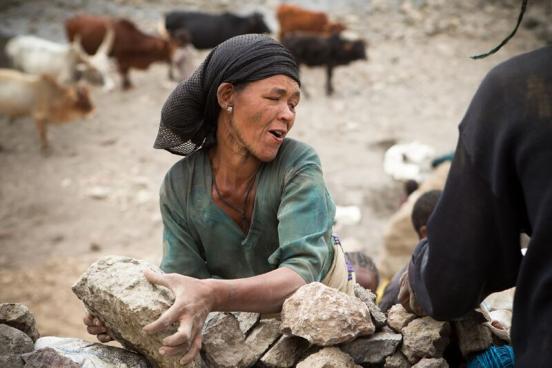 A large part of the work was done by women. The drought has made their life even harder. 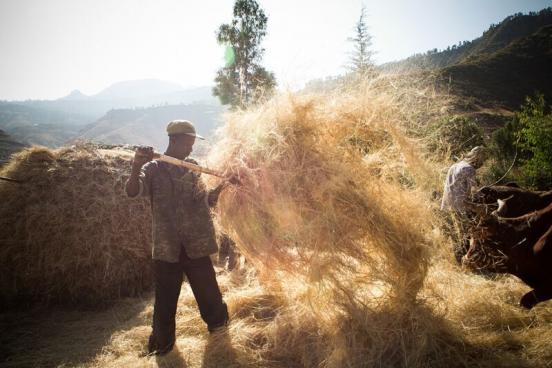 Shamble has been one of the beneficiaries. The training in new irrigation techniques yielded first results, he even was able to buy livestock. 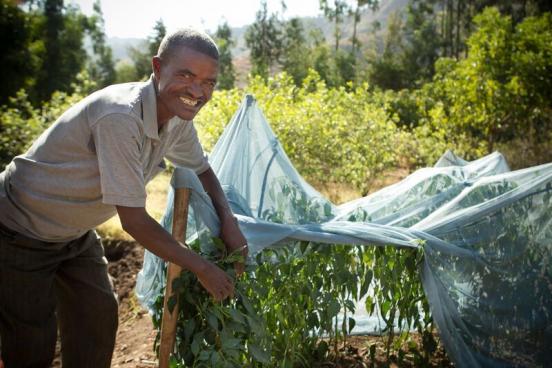 The LWF Project however has given the people involved the means to better deal with hardships and face the changing climate. 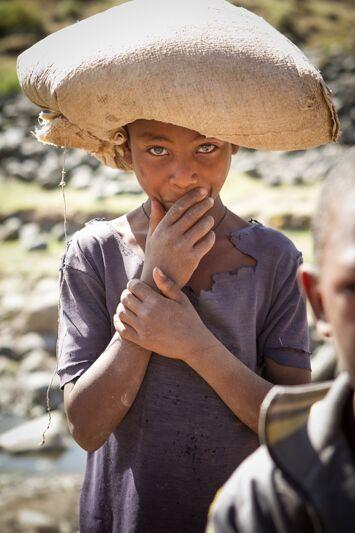 The families involved are better protected against hardships such as the El Nino year.

Hannah Mornement contributed to this story.