You, Me and War 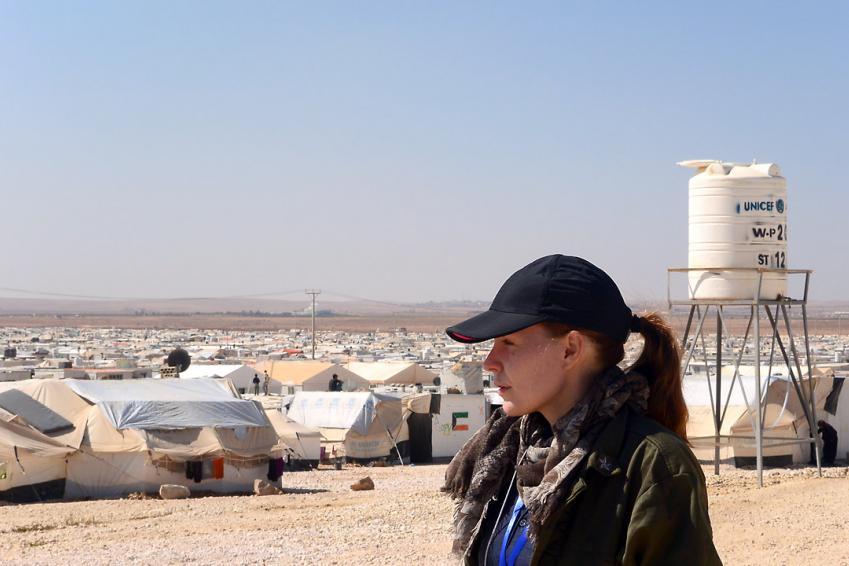 Oslo-based medical student and musician, Jenny Moe traveled to the Za'atari refugee camp in Jordan in the fall of 2014 to get a personal view of life for Syrians displaced by the civil war.  What she found touched her heart and musical soul; so much so, that she dedicated her song, "You, Me, War" in tribute to the 85,000 Syrians who live within the confines of the Za'atari camp in neighboring country, Jordan.  In recognition of "World Refugee Day" on June 20, 2015, this is her story.

I was born with wanderlust and a Norwegian passport. As an exchange student living in Paris, during my fourth year of medical school, I wrote a love song called You, Me, War.  Little did I know that the song’s refrain: Go where you want to go, would play such a prophetic role in my life. Five years after writing it, it was that same song that brought me to the Syrian border, to the Za'atari Refugee Camp in Jordan.

Go where you want to go…

Oslo, October 2014.  Vogue never mentions how to pack for a trip to a refugee camp. I’m rummaging through my crammed closet, trying to find clothes to wear. My wardrobe selections are minimal, decent, neutral – nothing fancy. In addition, I pack three HD compact cameras (sponsored by Nikon); a copy of Oxford Handbook of Wilderness Medicine (geeky, I know), my band’s t-shirt for gifts; and finally a copy of The New Middle East by Paul Danahar.

Arriving at the airport in Oslo, I struggle to settle the emotional knots in my stomach. Even though I’ve had the privilege of travelling to many exotic places throughout my life, I don't feel too confident about the journey ahead. After all, I’m about to travel to a refugee camp, a place that feeds, clothes and houses roughly 85,000 people; all ordinary people forced to flee their homes due to an on-going civil war, a war seemingly without end.

Despite all of my fears, I board that plane bound for Jordan anyway, determined to learn more about the plight of Syrian refugees. I do it not because I’m a thrill seeker or masochist, but because I still possess the one thing that inhabitants of camp Za’atari no longer have: freedom to go where I want to go.

Amman, Jordan October 2014.  At four o’clock am, I'm sleepily peering out a cab window as we speed through deserted roads from the Queen Alia Airport to the Amman city center. Even in the dark I can tell that the landscape is beautiful. I rest my eyes on stretches of desert sand, glimpses of sleeping camels. Suddenly, thousands of city lights dance before my eyes as I arrive exhausted at the hotel.

“We’ve come to take you to the refugee camp,” a man’s deep voice says to me by telephone at eight am. My heart is trying to pump away the exhaustion and physical disorientation.

“I’ll be there in five”, I groan, but not before texting my Za’atari camp contact to ensure that the phone call is indeed, a real one, and not some ruse – an embarrassing thought, but cautiously sincere all the same.  Scoring some bread and cheese from the breakfast buffet, I head toward the waiting car.

Traveling down Desert Highway toward Za’atari, our destination is 45 minutes north, towards Syria. Listening to music in the car, Khader, my early-morning wake up call, driver and a member of the camp staff, tells me about life in Amman before the war.

"We used to take weekend trips to Syria,” he says.  “Everything was cleaner, cheaper and greener".

We pass Al-Zarqa and stop a police checkpoint.  "They're looking for fighters. IS, the Daesh,” Khader whispers, his face grim. “They have many supporters here."

After the police clear us, we travel the rest of way in silence.  Finally, Khader slows down the car and points to his left, "You see it?" he says. At a distance I witness something that looks like a silver lake, almost a bright heat hallucination, under a pale blue sky. The desert stretches out for miles around it.  We arrive at the Za'atari Refugee Camp.

Camp Za’atari – Day 1 October 2014. It's visiting day for refugees, as relatives living in nearby host communities spend the day at the camp. Checking our identification papers at the entrance gate, before waving us through, we follow the main road, past the UNHCR office and continue on improvised roads between rows of tents, as if in a maze.

People are everywhere: kids in colorful clothes carrying turquoise-colored UNICEF backpacks; men in t-shirts, women in long coats, hijabs, burkas, many wearing sunglasses. Driving past them, I’m uncomfortable, fully aware of how little I know about their suffering.

Feel what you want to feel…

Being both an emotional singer/songwriter and (at times) a rational medical student, nothing fascinates me more than the intersecting points of the heart, brain and trauma.

Through my involvement with LWF World Service - the humanitarian arm of the Lutheran World Federation, I learn about a project called the "Peace Oasis," so aptly named by the kids who participate in the program.  Wejdan Jarrah, a thirty-something Sunni Muslim psychologist, and her team, run the program, which provides psychosocial support to young Syrian refugees.

"There was so much violence here in the beginning, so much frustration," Wedjan says. Solving conflicts without violence has become the cornerstone of the project’s work. One can understand why.  Even while sitting in Wedjan’s office, the windows open but there are three layers of metal bars around them.

"You see these? Returning to Syria, is what most of the messages said,” Wejdan explains, pointing out different drawings where children express their thoughts and dreams for the future.

Camp Za’atari – Day 2 October 2014. When I meet Khairat, she’s been living at the camp for 18 months.  She's hired to work as one of the “Peace Oasis” mediators.  Prior to the Syrian Civil War, she'd been studying English literature at the university. Many of her friends are still in Syria and they communicate over WhatsApp.

When her parents fled Syria, Khairat only took her most precious possessions, among them, an English-Arabic dictionary and some photos. "The first months in the camp, I woke up every morning, staring at the same caravan ceiling and crying,” she says.

Since Khairat speaks English, she handles her family’s camp registration matters. She remembers being separated from her family during sign-in and walking around the camp all alone until finding her uncle’s caravan. Reuniting with her immediate relatives the next morning was both joyful and bittersweet. Everything that she’d brought with her from Syria had been stolen.

"I stopped feeling sad, when I got this work at the ‘Peace Oasis’,” she tells me.

There are more reasons to celebrate, as Khairat finally begins classes at the Mafraq University, allowing her to continue her degree.

Camp Za’atari – Day 3 October 2014. On my last day in Jordan, we drive from Irbid to the camp in the bright sunlight.  Traffic is heavy and military planes are flying low to our left, controlling the borders. We pass a bright blue Pepsi Factory to our right. Their ironic slogan, Live for Now, makes me laugh.

At the camp, Mohamed, another “Peace Oasis” moderator, shares his story with me. Leaving with a group of friends and some members from the Syrian Free Army, Mohamed arrived in Jordan after a 17-hour trek by foot.  His mother came to Jordan later, but his father remains in

Syria. Now, it is through working at the “Peace Oasis” program that he finds meaningful work. "I play soccer here each week, too," he laughs.

Later in the day, I sit in on two sessions, the first with a group of boys, then girls, ages nine to 14. They write down words to be placed inside a heart. The words on the outside are things that they want and do not want, empowering themselves and rebuilding their self-esteem.

In their own ways, Mohamed and Khairat have already achieved these goals. Leading the sessions, they are brilliant. They get the kids engaged and active, the laughter comes easily. They care about these kids, and it's obvious they have found a purpose.

I’LL STILL BE HERE BEING THE ONE WHO BELIEVES…

Members of the “Peace Oasis” program fill three memory cards with film and photos for me to bring home, footage for which we will create the music video.

With my Norwegian passport safely in my bag, I say my goodbye to the team. Khader drives me back to Amman. It feels wrong that I can just leave, continue my life, while the lives of the Syrian refugees are on hold. As I board my flight back to Oslo, I watch the city lights melt into small dots on the horizon.

At 10,000 feet, I wish that I was already an experienced neuropsychiatrist or a hardcore aid worker, but I’m not. I don't know the solution to the problem, but what I do know is this: there is a dedicated team on the ground, working hard to make young Syrian refugees capable of leading peaceful lives in a peaceful society. Of that, I can be a supporter, and that is, at least, a beginning.

Learn More About You, Me and War