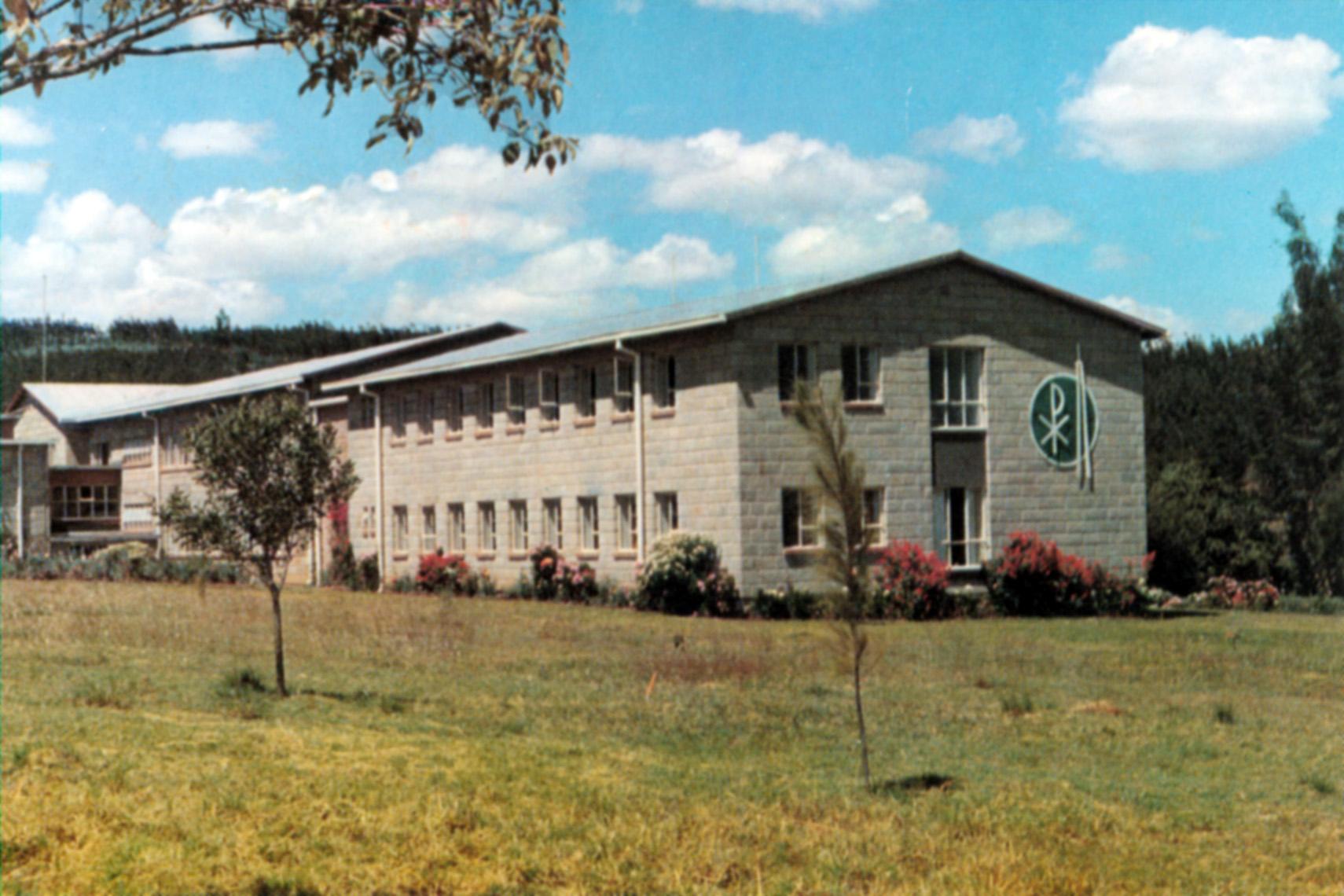 The Radio Voice of the Gospel (RVOG) building in Addis Ababa, Ethiopia.

We left Iceland in a snowstorm and when we landed in Addis Ababa it was 30°C ! We were driven to the Radio Voice of the Gospel (RVOG) headquarters, where the entire staff was gathered in festive mood.

Another car came and the Emperor Haile Selassie appeared to celebrate RVOG's 10 years of operation. We immediately understood the status of RVOG in the country. This was late February 1973. 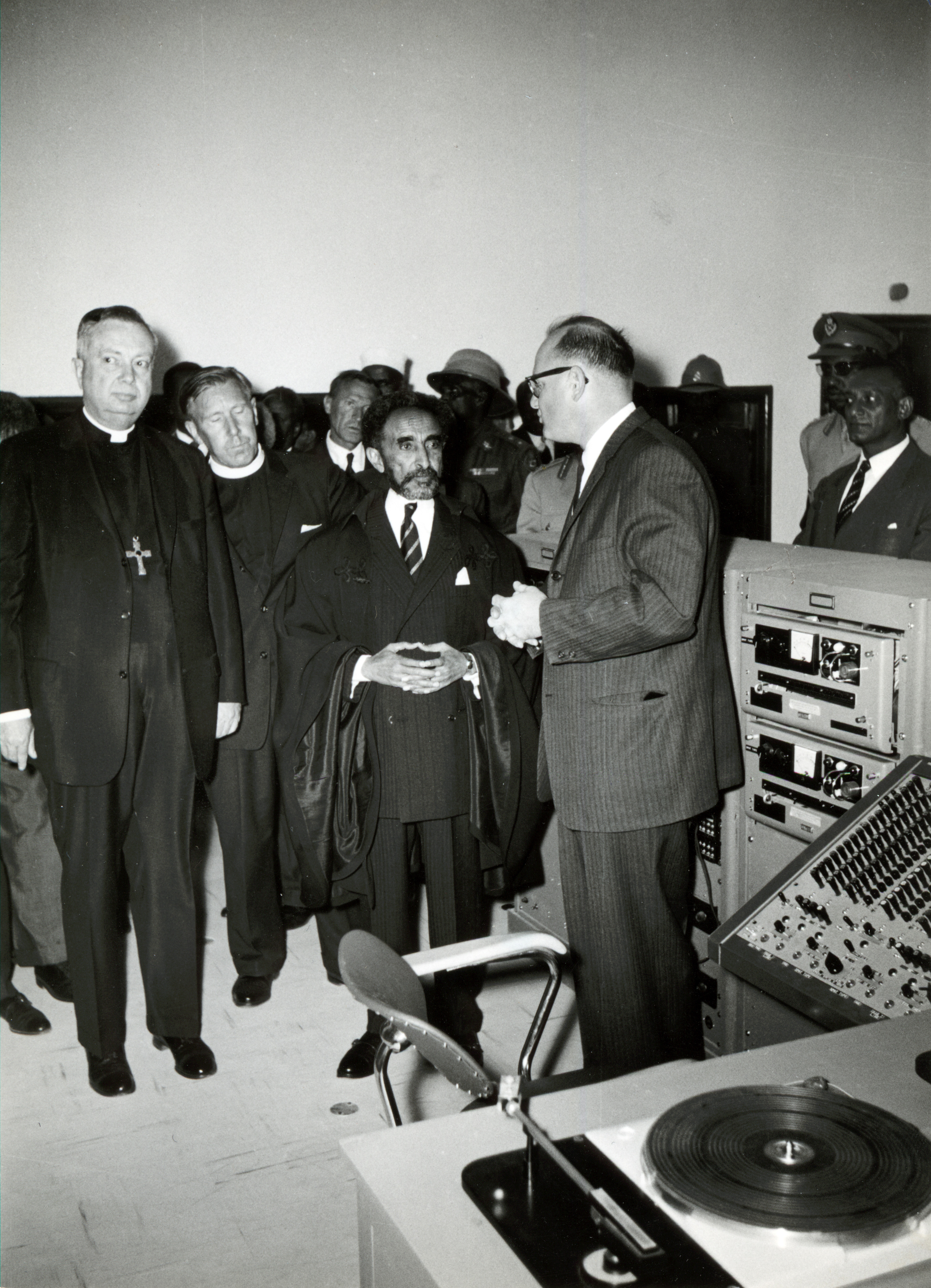 Emperor Haile Selassié during his visit to the RVOG in 1963.

Four years later, very early in the morning on 12 March 1977 two fullly armed soldiers knocked brutally at the doors of the RVOG staff house and led us to the radio station, where we were informed that the Provisional Military Government of Ethiopia had nationalised RVOG. The buildings and equipment were confiscated for the services of what was to become Radio Voice of Revolutionary Ethiopia. A few key staff would continue working temporarily but nobody was allowed to leave the compound. The lady who operated the telephone switchboard was unable to reply with the new name. However, she found an acceptable solution: Tena Steling (which means “Hello”, “How are you?” in Amharic), Radio Voice!

When transistors opened up the world! 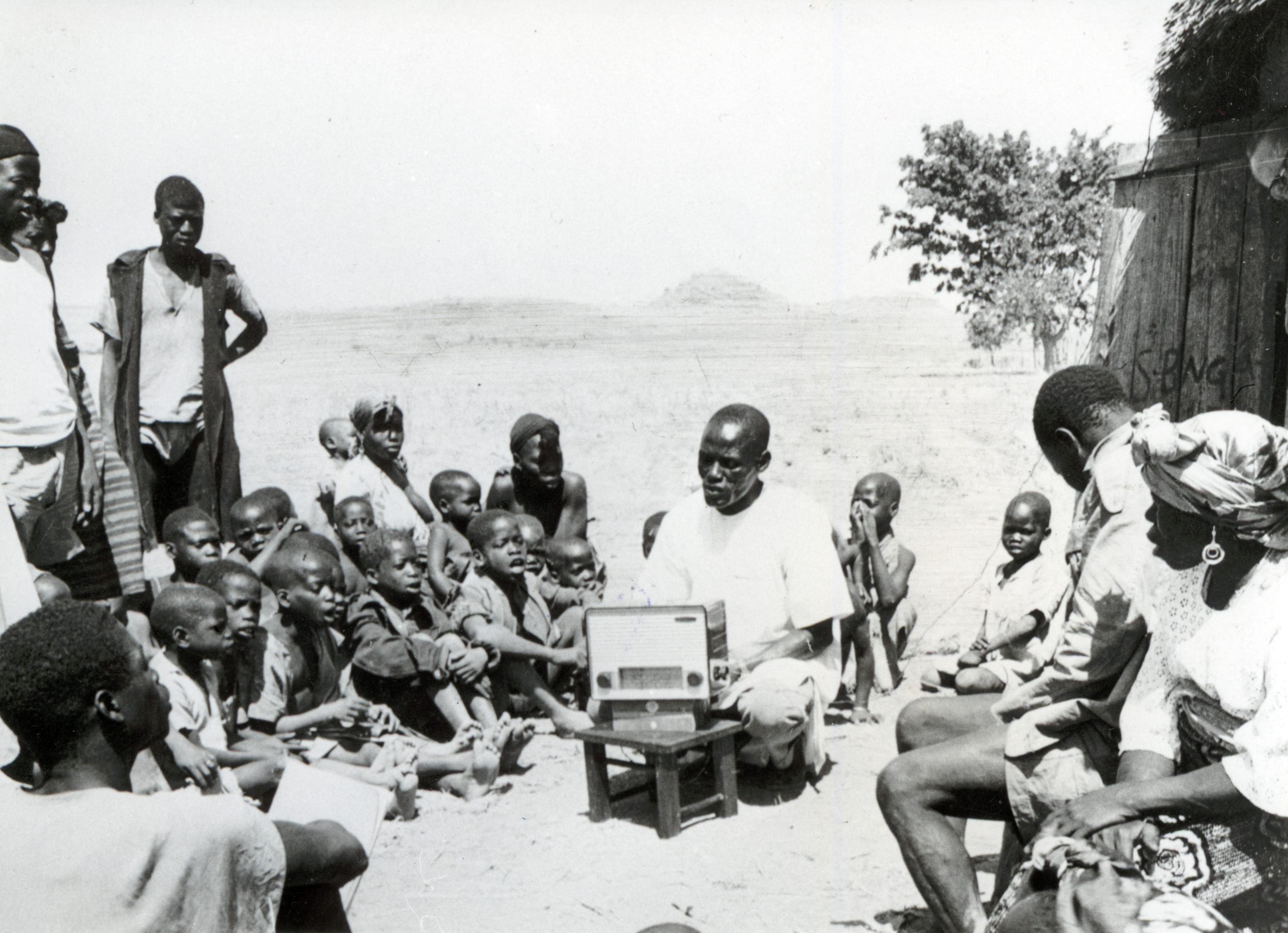 Villagers and yougsters gathered to listen to the radio.

When the radio transistors became available in the late fifties, the reception of radio messages  was possible everywhere. As it entered into the oral tradition of the developing world, radio could become a privileged medium of communication. A visionary in mission work, Sig Aske from Norway became the first director of the LWF radio project and with the unique cooperation of the Emperor, land was given in Addis Ababa and permission granted to operate two 100 kw  short-wave transmitters.

RVOG was unique in religious broadcasting in the mission field. Its programs were designed to serve the mission of the church, be contextual as well as true to life and culturally relevant. All programs were to be produced in the areas where they would be heard. No program packages produced elsewhere could be accepted. RVOG´s programming aimed at being 70% educational and cultural and 30% evangelistic. However, some felt it should be 100 % Christian, catering to the total needs of the human beings! 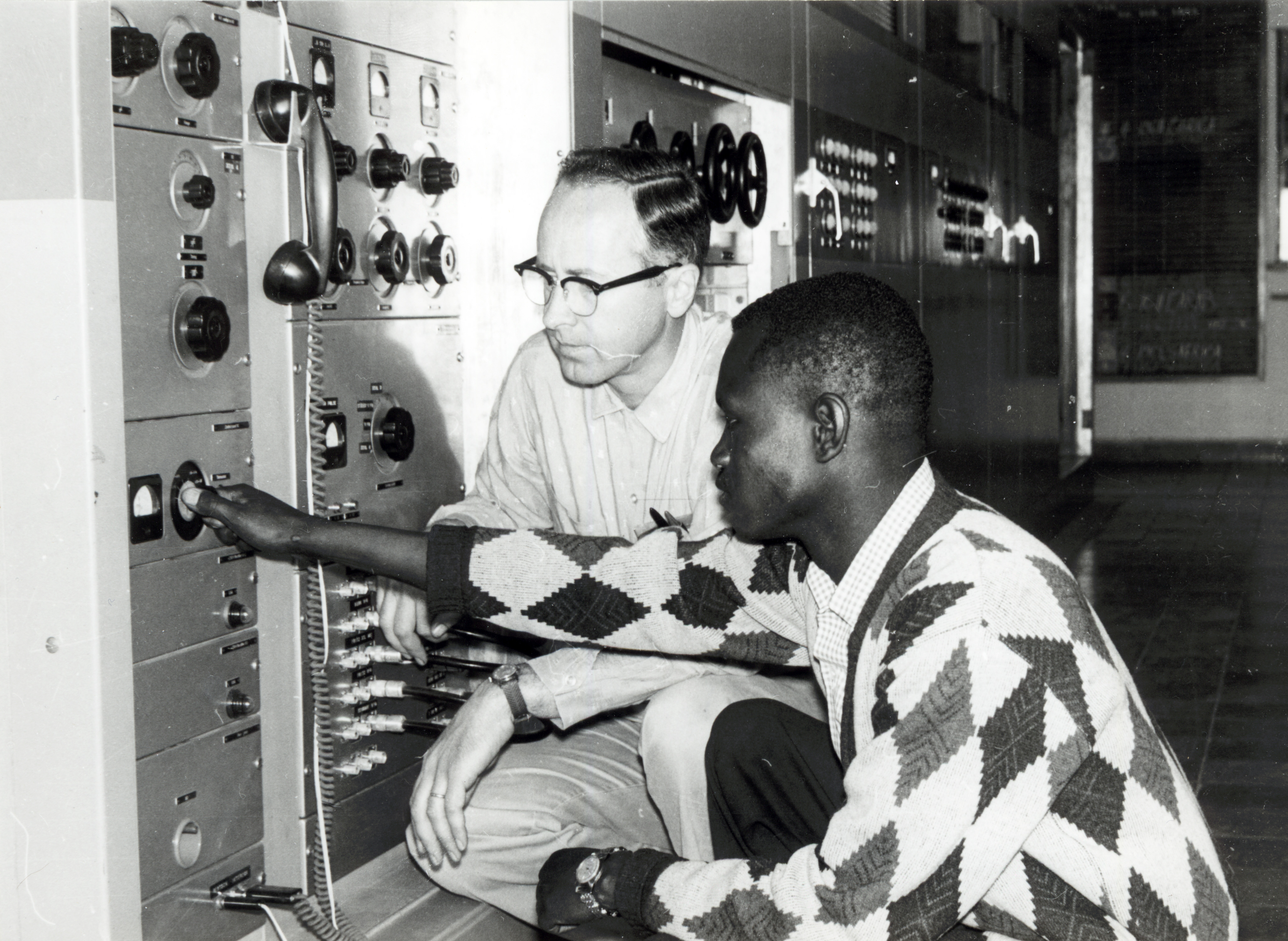 An area studio was established  in corporation with the LWF member churches who were ready and able to assume the responsibility for program production and follow up work. LWF provided some financial assistance, training of staff and consultation service. 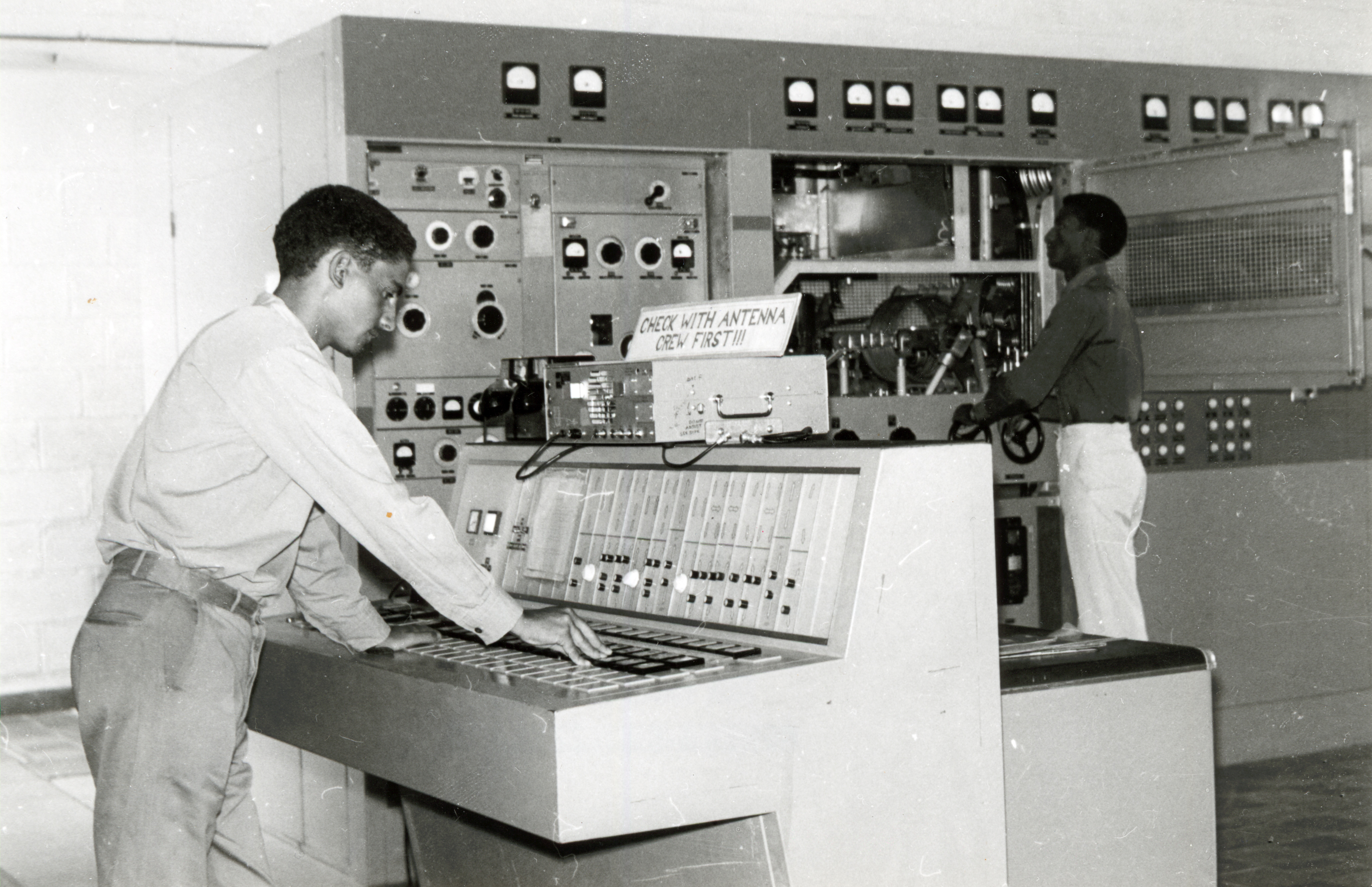 Radio operators at the RVOG.

When I started working at the RVOG headquarters,  there were 12 area studios making programs in 20 languages. Their taped radio programs were sent to Addis Ababa by air and broadcasted to their designed areas on two 100 kW SW transmitters owned by LWF. There were also MW broadcasting in English and French mainly to Addis Ababa.

The Ethiopian authorities, thanks to the excellent relations of the Lutheran missionaries, especially Sig Aske, with the Emperor Haile Selassie, gave RVOG a free hand content wise with one exception, all programs and news in Amharic, the local language, had to be subject to censoring, which was customary in Africa at that time.

The importance of uncensored news

The newsroom was for many the flagship of RVOG. Very experienced newsmen using the international news services managed to maintain its integrity.  They wrote in English and French, and representatives from the area studios did the translations and added what could be of particular interest to their area.

There is no doubt that RVOG did help to build up the credibility of the churches behind each area studio. The frequent visits of staff from Addis Ababa providing training and consultation resulted also in valuable self-confidence and communication awareness. This impact could easily be seen when the area studios transformed themselves into communication centers that use multimedia approach in their work.

Bernhardur Gudmundsson  was the Audience Relations Officer at RVOG in Addis Ababa 1973-77, director of media and education, Church of Iceland 1978 - 91 and executive secretary for Communication consultancy LWF Geneva 1991-99.

Author
Bernhardur Gudmundsson
Disclaimer: The views expressed in this blog are those of the author, and not necessarily representative of Lutheran World Federation policy.
Country:
Ethiopia
Region:
Africa