Tribute to a Pioneering Woman in the Ordained Ministry 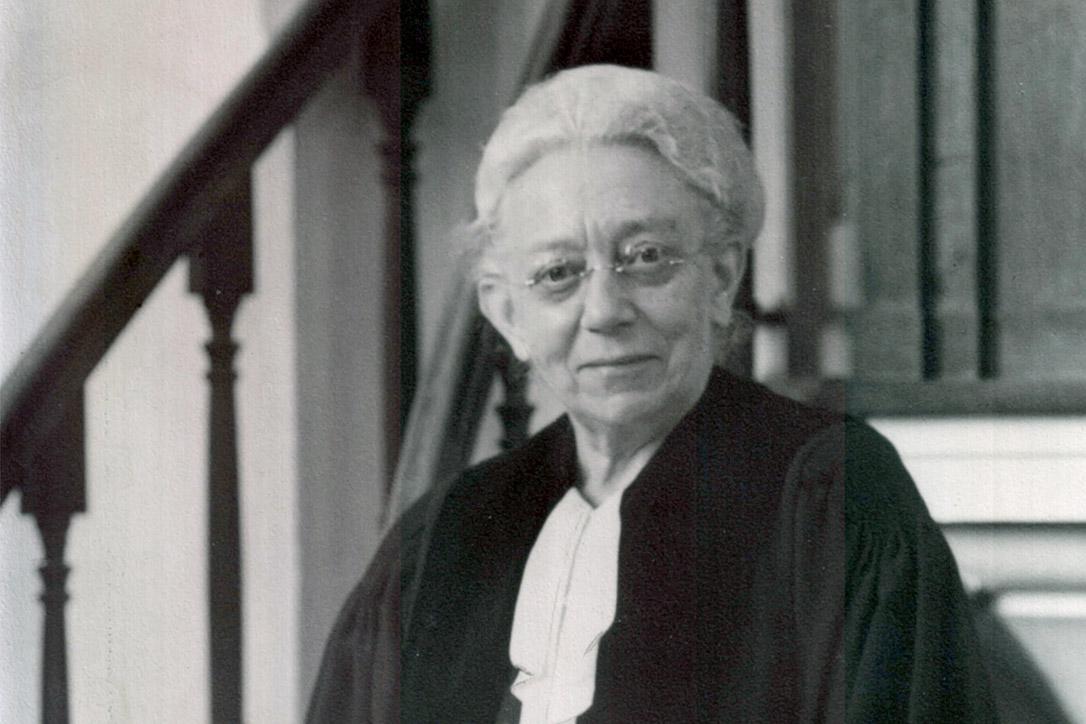 As much as it is a fact that Jantine Auguste Haumersen was the first woman pastor ordained in the Evangelical Lutheran Church in the Kingdom of the Netherlands, it was another woman (later to be ordained as pastor as well) who prepared the way for women’s ordination in the Dutch Lutheran church.

In 1922 Laurence Caroline Dufour (1902-1988), then a student of theology in Leiden, addressed the Lutheran Synod in a letter, putting forward the question of whether women might be formally ordained as pastors, and serve parishes in the Lutheran church.

The question was discussed in the June 1922 synod, and some synod members expressed doubt as to whether there would at all be parishes which would call women pastors. Others, among them Prof. H. A. van Bakel, then professor of theology at the Lutheran Seminary, stated that “there was no principal argument against women ordination” and that in line with Paul (Gal 3: 28), in Christ there is no man or woman.

In the end, the synod decided unanimously that there was no argument to be found in the regulations that would contradict the ordination of women.

The question was again debated in synod in 1926, when the influential Amsterdam parish pushed for a ban on women’s ordination on the basis of 1 Cor 14: [34-36]. Again it was Prof. van Bakel who responded that biblical quotations needed to be seen in their historical setting and could not plainly be used as argument in a question of today’s agenda. Other arguments put forward were the questions whether women would be strong enough to fully serve as pastors in a parish (some pleaded for a restriction to become vicars only, as was the rule in the Reformed Church at the time). Again, others argued that since there were few men to be found as pastors in those days, it would be foolish to not call women to be pastors (an argument strongly refuted by Haumersen later in articles and lectures).

The synod decided against the request to ban women’s ordination.

In 1927 however, the synod decided that married women should not take up or keep fulfilling the responsibility to serve as parish pastors in all aspects. Women pastors in charge of parishes who would get married would have to quit their ministry.

In fact the first married woman to be a pastor in the Lutheran Church was L.J. Houtman-Visser, 1975-1984.

Born on 4 March 1881, Jantine Auguste Haumersen studied to become a schoolteacher and first worked in this profession (teaching catechism) from 1905 to 1923. In 1917 she took up the study of theology in Leiden and became vicar of the Reformed (“Hervormd”) parish in Koedijk.

She later enrolled in the Evangelical Lutheran Seminary in Amsterdam and got a call in 1929 to serve the Lutheran parish in Woerden-Bodegraven (until 1934) and Kampen (until 1948). In the latter parish, a commemoration stone in her honor was placed in the church on the occasion of her 12 ½ years as a pastor.

Haumersen belonged to the “free-thinking” (vrijzinnige) stream tradition of those days, and was a very active member of the “Circle of Women Pastors in the Netherlands” (founded in 1923).  In 1941 she became member of the Synod of the Lutheran church as well.

She published and lectured frequently on the subject of women’s ordination, and published a translation of one of Luther’s writings (Eine treue Ermahnung… 1522). She served several periods as chairperson and secretary of the Lutheran pastors’ organization.

On the occasion of her ordination on 17 November 1929, the ordaining pastor, J.L.F de Meijere, referred to Paul in his sermon, as an illustration that “in Christ there is no man nor woman…, and that there should, therefore, be definitely no restriction in the Evangelical Lutheran Church in that regard. Haumersen herself preached on Mic 4: 12, a text she often took up on special occasions.

Upon her becoming a pastor in Woerden-Bodegraven, a local circle of reformed “free-thinkers” dissolved their network and joined her services. Some of them became formal members of the Lutheran parish.

When Haumersen resigned from active ministry at the age of 67, her sermon was on 1 Cor 3:13, cumulating in the sequence: “All we did wrongly or did not do at all, we cannot change or make right. Therefore we should be mild in our judging of others. Let that be our way of approaching God: in humbleness.”

After her retirement, she spent another 20 years in the house “Mooiland” in Doorwerth, where she died on the 3 December 1967, a first Sunday of Advent, and she was buried in a humble ceremony.

From newspaper clippings about her death, Mejuffrouw (meaning: unmarried lady) pastor J.A. Haumersen took her parish responsibility with great vigor and thoroughness. Tribute was paid to the exemplary fidelity in her service by visiting the sick and making home calls. Nothing was too much for her, if it came to keeping her flock together and gather them “in the church”. Old and older people in Woerden, and even more so in Kampen, still tell stories about this.