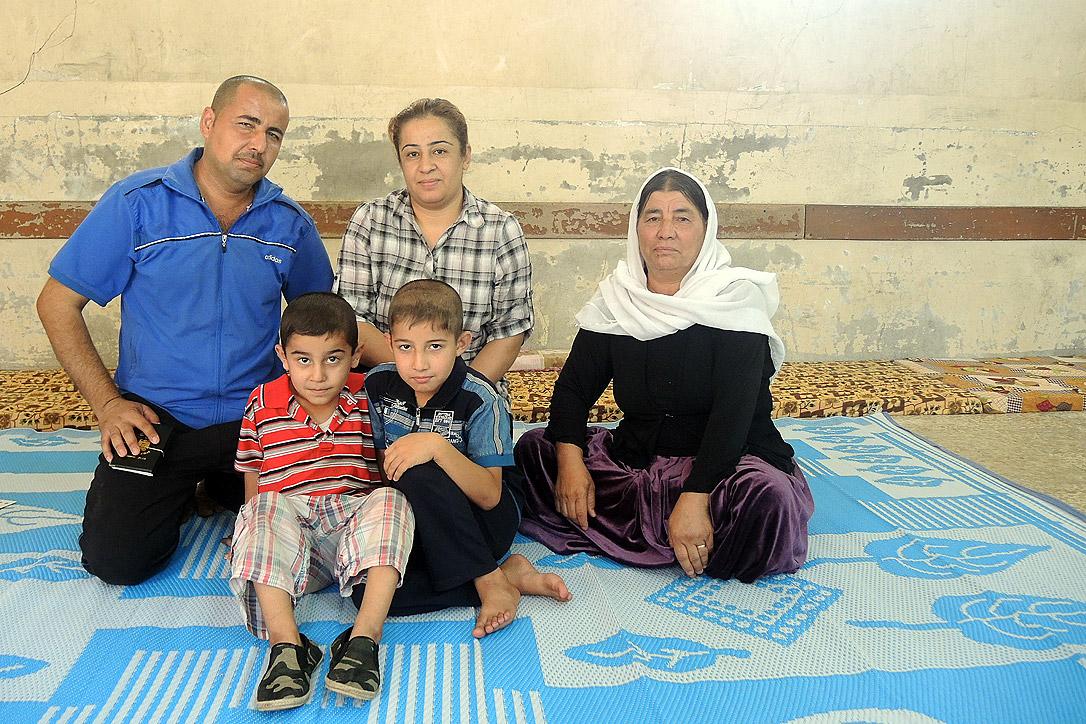 Amer Abdullah, left, fled the town of Baashiqah with his family. They are taking shelter in a school in Northern Iraq. Photo: Anne Dreyer/ACT-DKH

by
Department for World Service

The LWF team has arrived in northern Iraq. Currently they are assessing the situation to plan how best to assist people fleeing conflict in the Mosul area. Sharma Tulasi, team leader of the LWF/DWS Asia Emergency Response Hub, gives a first report from Dohuk.

We are now in Dohuk, Northern Iraq. The total population of internally displaced persons (IDP) in Dohuk governorate is 462,270 (Kurdish regional government data as of 18. August 2014).

The IDPs are mainly Christians and Yazidis, but there are also Muslims, some of them Sunni. After the Islamic State (IS) group tried to forcibly convert them, they fled to Kurdistan, the Northern part of the country, which they believe to be a safer place. The people are mostly from Ninewa province and its main city, Mosul.

Most of the IDPs are living in community buildings like community halls, churches and mosques. Some of them are also living under bridges. The Kurdish regional government has coordinated the assistance program well.

Last evening I visited a camp with 468 people in a community hall. It has a big room shared by many families. They have mattresses and pillows but asked for some ventilators to cool the room since it is quite hot. Many of them could not manage to bring anything. Their items back home were taken.

They have been given enough food but they are forced to cook and eat in community kitchens. They will need warm clothes and heaters since winter is approaching. There are children, pregnant women and infants, elderly and people with special needs. The basic medical care is given by the government here. There are frequent visits of doctors to see if anyone needs medical attention.

Currently our team is working on a detailed assessment of the situation. We found that there is no designated place for these IDPs, they are scattered everywhere in the Kurdistan region of Iraq. Most of them are found to be living in the Dohuk Governorate where LWF wants to focus its life saving program. We found that the government is providing two hot meals a day, but people want to have their family kitchen to serve themselves better. We consider providing kitchen sets, clothes especially for children, elderly, lactating and pregnant mothers and people with disabilities.

As of now, Dohuk is quite safe, although the Mosul dam between Mosul and Dohuk is not far from here. The dam which supplies water and electricity for the rest of Iraq is strategically important for the IS. A few days ago IS took control over the dam but lost it to the Kurdish army Peshmerga soon after. There is some expectation that IS might come back to reclaim it. If they succeed to do so, the security challenge will increase for Dohuk as well.

Author
Department for World Service
Disclaimer: The views expressed in this blog are those of the author, and not necessarily representative of Lutheran World Federation policy.
Themes:
Humanitarian
Program:
Humanitarian and development / Country Programs
Country:
Iraq
Region:
Asia