Peace is a shot on goal 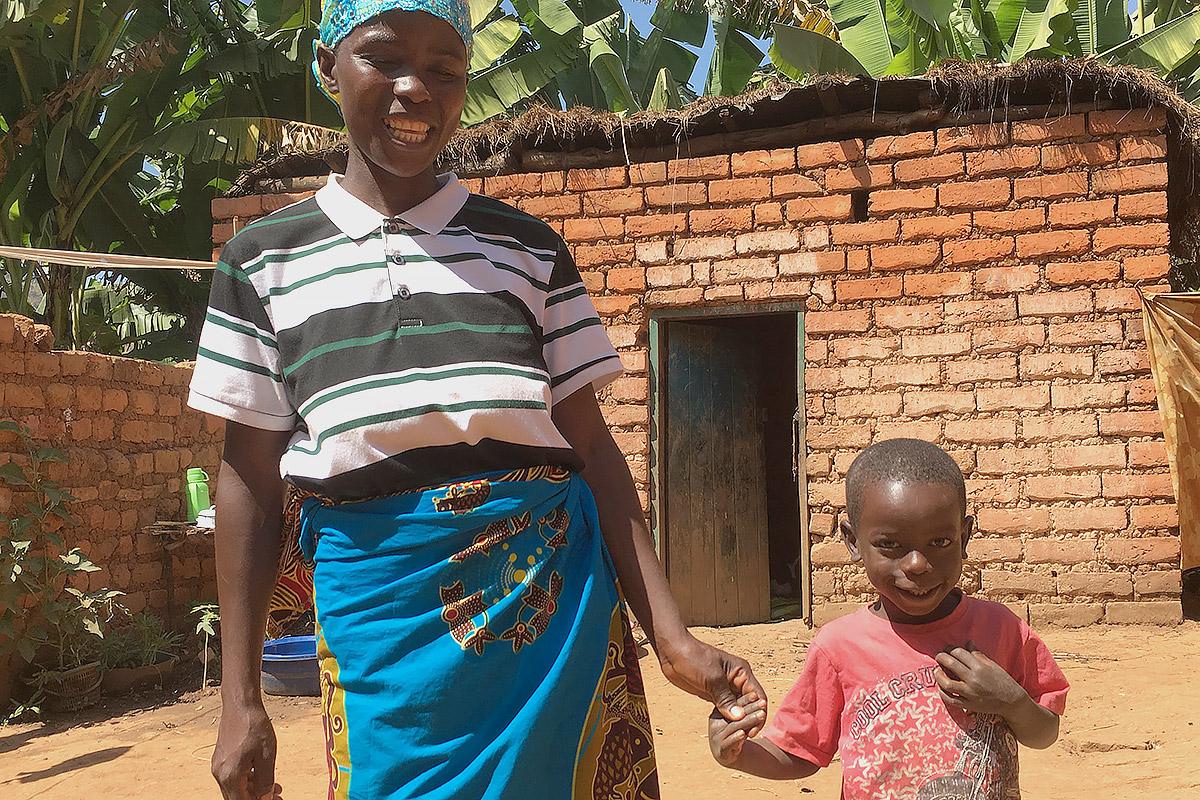 EspÃ©rence manages to get her son, Divin, to stand still just long enough for a photo before he and his friends go back to playing their own version of the World Cup. EspÃ©rence is reaping the benefits of a vegetable garden she planted, with support from the LWF. Photo: LWF/Pablo Lo Moro

Impressions of Burundi through the World Cup cycle

As football fanatics were watching the 1994 FIFA World Cup, large-scale violence had already broken out in Burundi and elsewhere in the African Great Lakes region. In 12 years of civil war, 300,0000 Burundians would die.

After this awful storm came peace. Just as the 2006 football World Cup drew to a close, the last warring parties in Burundi were getting ready to sign a peace agreement in Dar es Salaam. It was the dawn of a new era for all Burundians.

Thoughts of these grave events weigh heavily on me as I visit Burundi for the first time to learn about the work of the Lutheran World Federation (LWF). Against all expectations, my impression was not that of a bleak mosaic of resentful ethnic groups. It sank in very quickly: Burundians are moving on, even if not all is right.

“During the war, neighborhoods were almost closed off. Now we can move everywhere and most youngsters don’t really care what group you are,” says Norbert Ndikumana, a kind and steady-handed LWF driver who once saw landmines blow up a part of his humanitarian convoy. Though everyone had an awful war anecdote to tell, their concluding remarks pointed consistently to reconciliation. Former foes are learning to live together in peace.

During the war, neighborhoods were almost closed off. Now we can move everywhere and most youngsters don’t really care what group you are. – Norbert Ndikumana, an LWF driver

At the eastern edge of Burundi, LWF is supporting Cankuzo and Ruyigi, two of the poorest provinces. Locals generously made room for droves of former refugees coming back home after exile in Tanzania. Hundreds of thousands still remain in Tanzania, as well as in other neighboring countries. More recently, eastern Burundi began hosting people fleeing violence in the Democratic Republic of the Congo.

For most villagers, such as Espérance Bigirimana, a proud mother of six, subsistence farming is all there is. Since LWF introduced more efficient farming techniques, fewer people go hungry. Espérance displays a neatly trimmed vegetable garden and the compost heap her husband had just turned over. “Though simple, this was not done before,” says Jacques Ntirirusha, LWF Livelihoods Officer. “For example, we introduced practices to preserve the moisture of the soils and help plants resist the dry season. More adapted varieties also drove up yields.”

Thanks to a little surplus production and by participating in LWF-sponsored schemes – such as self-help groups, micro-credit cooperatives and donating livestock offspring – villagers have slowly improved their quality of life. Some have patched up their homes, now boasting waterproof roofs and upholstered furniture. Others have bought bicycles or sent their children to school.

LWF has helped a number of young entrepreneurs in Cankuzo and Ruyigi succeed in selling cash crops and even making value-added products, such as vegetable oil. None of this would have happened without the generosity of the Australian Lutheran World Service, Bread for the World, the Dutch Lutheran Mission, the Evangelical Lutheran Church in America (ELCA), the Evangelical Lutheran Church in Württemberg, the German National Committee of the Lutheran World Federation, the UN Food and Agriculture Organization and other donors, including private individuals. “We need to continue this transformation,” says Désiré Njiji, Cankuzo’s governor.

LWF is also helping transform public health in Cankuzo and Ruyigi. By making mosquito nets and malaria treatment accessible, deaths have decreased. Jesse Kamstra, outgoing LWF representative in Burundi lays it out neatly: “Before low-cost malaria screening and effective treatment was made available locally, infant mortality rates could reach one-third in some places. You now see those kids playing ball in the village instead.” This successful program was made possible through ELCA’s support. Who knows, maybe one of those kids will be the star of the 2038 World Cup!

The overall economic and political situation in Burundi remains dire. The scars of this conflict are still visible. Everyday life is hard. From a statistical perspective, it takes a lot of scrolling down the UN’s Human Development Index rankings before finding Burundi almost at the bottom. The country needs massive support to get back on its feet.

Eager to catch up on 2018 World Cup action, I join a bunch of locals around a TV screen. It is a jovial, multi-ethnic crowd. This scene would have been hard to fathom just three World Cups ago. Notwithstanding its turbulences, Burundi is edging forward. Peace and prosperity is a goal worth scoring. Then can celebrations truly begin.

Opportunities for the future
blog

“Blue flowers” in the desert
blog