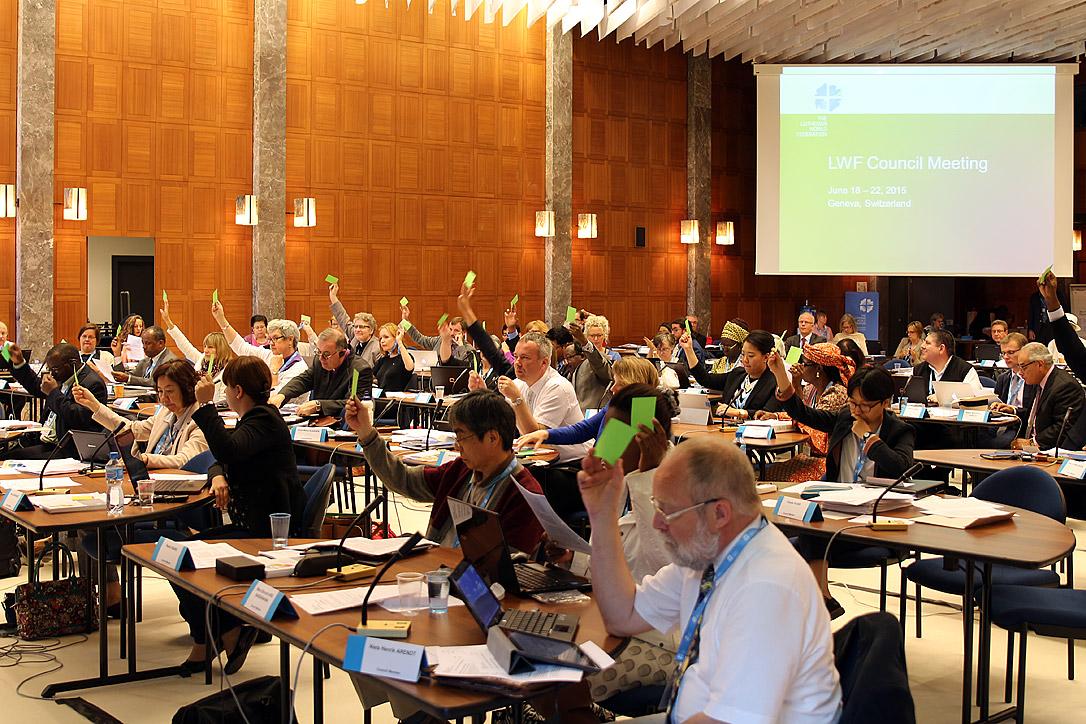 Councillors vote to accept a new member to the Federation

After a festive Sunday service in St. Pierre Cathedral in Geneva, the LWF Council met for its last day of business on Monday, 22 June. The morning began with a discussion on the sustainability paper presented to the Council on Friday, 19 June, which is designed to protect the LWF.

Subsequently, the Council received reports from the committees that had been in session Friday and Saturday.

The Standing Committee for Constitution and Membership recommended accepting  the application of the Lutheran Church in the Republic of China into membership of the LWF. The Council happily adopted the recommendation, bringing LWF membership to 145 churches.

The LCROC is a small church with 570 members and grew out of the work of missionaries of the Norwegian Lutheran Mission in the 1950s. Today, the church is independent.

The Committee also recommended the following resolutions for action by the Council:

The Council adopted the LWF fundraising strategy. It also approved the report of the auditor on the financial statements for 2014 and approved the 2016 budget.

The Council received an update on the LWF endowment fund. Bishop Susan Johnson from the Evangelical Lutheran Church in Canada explained how her church had raised over twice its fair share for the fund since 1998 by designating 10 percent of its unrestricted income to the fund.

The Council also received an update on the Augusta Victoria Hospital in Jerusalem and the Council shared appreciation for the late Dr Tawfiq Nasser for his leadership of the AVH.

The Council also approved reports from:

The German National Committee welcomed the Council to Wittenberg where the 2016 Council meeting will be held.

The Council concluded with prayer.

Author
Sandra
Disclaimer: The views expressed in this blog are those of the author, and not necessarily representative of Lutheran World Federation policy.
Themes:
Communion
Program:
Governance
Series:
Council 2015