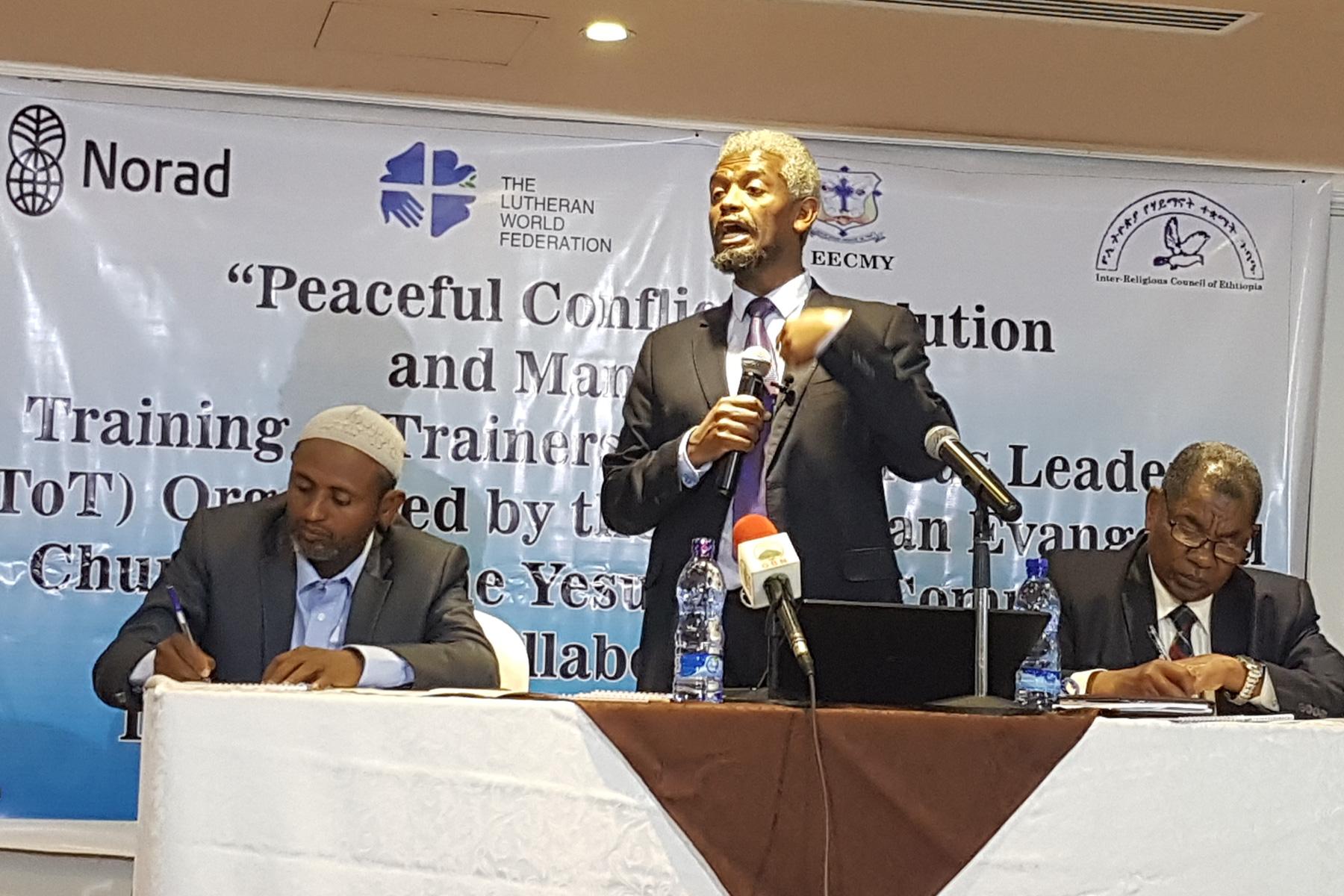 The Lutheran World Federation (LWF) and the Ethiopian Evangelical Church Mekane Yesus (EECMY) signed a project agreement in June to promote inter-religious tolerance and peace in the country. The initial goal was to mend religious intolerance and violence that has plagued some districts in the far western parts of the country. However, the focus was adjusted to include national healing and reconciliation, considering the rising ethnic violence and internal displacement taking place in many parts of the country.

After many years of closed democratic space, the new Prime Minister Abiy Ahmed Ali promised to usher in a new democratic dispensation releasing political prisoners, allowing exiled dissidents to return home, normalizing relations with arch enemy Eritrea, a new Cabinet comprising 50 percent women and the subsequent election of Sahle-Work Zewde as the country’s first ever woman President. These are tantamount to miracles in Ethiopia’s political history.

Nevertheless, the new political environment is not without challenges as new political actors compete to position themselves within the new democratic dispensation and the old guards wrestle to discredit and impede the reform process. As result, Ethnic violence and internal displacements are on the rise. Today, Ethiopia tops the global list of countries with the highest number of conflict-induced internally displaced persons (IDPs) according to the latest Internal Displacement Monitoring Centre report. This presents a real challenge to the reform agenda of Premier Ahmed.

It is against this background that more than 100 Ethiopian religious leaders received training on “Peaceful Conflict Resolution and Management Skills” in Addis Ababa in October. Under the auspices of the Inter-Religious Council of Ethiopia (IRCE), they discussed how they might mitigate the religious, ethnic and political conflicts springing up in various parts of the country.

Ethiopia is a very religious country, with 97 percent of the population claiming religious affiliation. Hence, the role of faith leaders in shaping public opinion and building bridges across ethnic and religious divides is indispensable.

Participants discussed the theological underpinning for peace found in both Christian and Muslim teaching. These sessions were facilitated by prominent theologians from the Ethiopian Orthodox Church and the Ethiopian Islamic Affairs Supreme Council.

Discussions highlighted the unanimity of the two religions around peace, care for neighbors and for all God’s creation. They addressed key concepts such as love, forgiveness, reconciliation, justice, conflict, violence and war.

The religious leaders also discussed what contributions they could make toward national reconciliation and nurturing a culture of peace. For centuries, Muslims and Christians have lived in harmony, and even used to celebrate each other’s religious festivals alternately.

Participants probed possible root causes of the current conflicts: manipulation of religious or ethnic identities for political purposes, lack of job opportunities for youth, an eroding sense of national identity and solidarity, the lack of teaching about human rights and the absence of democratic space. They underscored the importance of setting examples of inclusivity and speaking truth to power.

The experiences shared at this training highlighted the wealth of resources religious institutions have to bridge divides and achieve national reconciliation. Some participants spoke about instituting an independent “Truth and Reconciliation Commission” to address the root causes of conflicts.

In order for Ethiopians to address long-standing grievances and move toward genuine democracy, every citizen must support the fragile transition through active and peaceful participation. In turn, the national institutions and the international community should provide neutral forums for discussions, empowering different sectors of society to play their part.

As a follow up to the workshop, the LWF, EECMY and IRCE will host an interfaith peace conference in Addis Ababa this December.