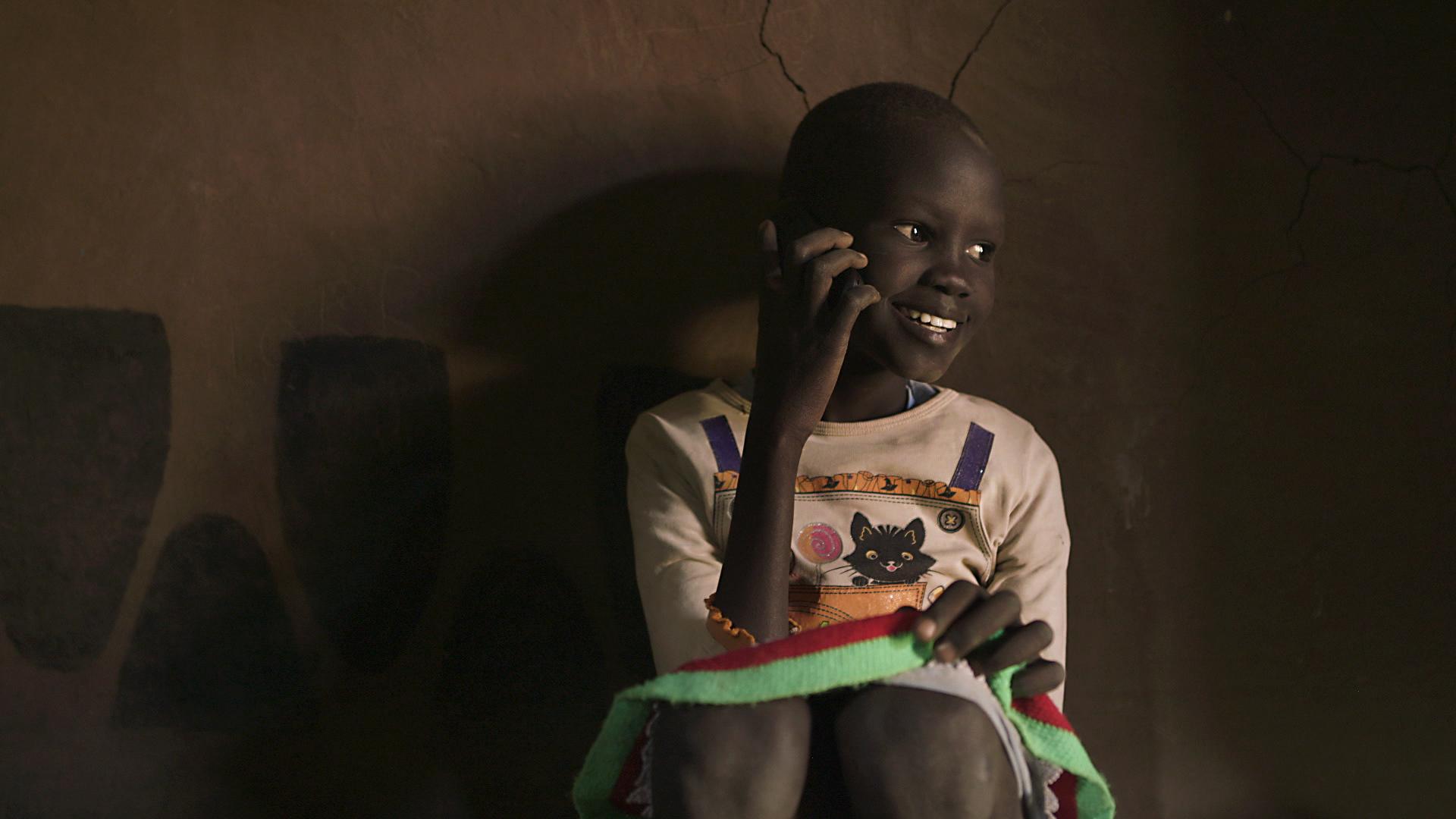 Nyakong talks to her mother (film scene). Photo: Cassette for timescapes, from: The Invisible City [Kakuma] by Lieven Corthouts

The literal translation of the name of the refugee camp is “Nowhere”. The  Kakuma camp was meant to be temporary one, a place to shelter the “lost boys”, former child soldiers from South Sudan. It has become a town of about 200,000 inhabitants near the Kenyan border to South Sudan which this year will celebrate its 25th anniversary. The documentary “The invisible city – Kakuma” by Belgian filmmaker Lieven Corthouts follows three refugee children living in that camp.

There is Claude, a teenager who is working different jobs from cutting hair to building walls, all the while waiting for his name to appear on the signboard for resettlement. Khadijo is a Somali girl in secondary school who studies hard to win a scholarship and escape a forced marriage. And Nyakong is a maybe ten-year-old girl whose mother went back to South Sudan and left her with a foster arrangement. The documentary shows Nyakongs attempts to learn about her mother’s fate in what has now become a war zone, Khadijo’s desperate hope for education to change her life, and Claude’s dream of America, the country where “the people are honest and have the knowledge”.

If their story were a fictional movie, it would probably end with three happy faces: Nyakong re-united with her mother, Claude in the US, Europe or Sweden and Khadijo in a Canadian university. But it is not that kind of story. This is a documentary and in 70 minutes, the film shows waiting and expectations of an ideal world and the reality of a refugee camp.

They learn about their right to education, but that does not automatically lead to a better life. The Red Cross can’t fix an invalid phone number to South Sudan any more than Nyakong or her foster mother. It also raises the question on how spreading hope makes us responsible, when dreams do not come true. Education made Khadijo dream of life outside an arranged marriage. What happens if she does not have the means to continue to university?

Watching the three refugee children fall and get up again becomes a recurring theme, especially in following Nyakong, the youngest. The light in her eyes as she speaks with her mother on the phone and her tireless inquiries with every group of new arrivals fleeing the war in South Sudan tell us a lot about resilience and the power of hope. The camera provides a very intimate perspective, often resting on their faces to show what is not put into words.

Life does not wait

At some point, for each of them the bubble bursts and the protagonists are confronted with facts the audience already knows or at least suspects. In this moment, you can’t help but feel responsible. Was it wrong to nurture those dreams? While your brain still desperately searches for a solution, the children have taken matters into their own hands. They can’t afford to wait: The world might take its time looking for answers to the refugee crisis, but life doesn’t wait for them. The line between hope and desperation blurs as each of them makes a decision.

The film is open-ended. It raises questions about responsibility, motivations and the definition of happiness. Their stubborn belief in a good future is one of the impressive features in the documentary. We may smile at Claude’s unbroken enthusiasm, but we should never underestimate the power which a desperate dream can unleash. Khadijo’s way proves that, if nothing else, life in Kakuma has made her a survivor.

The screening on Thursday will provide an opportunity to meet her, and ask one of the many open questions the documentary leaves us with.

LWF has been working in Kakuma refugee camp since it was set up in 1992, specializing in primary and secondary education and protection services for unaccompanied minors and separated children. Understanding that young people need more than schools and relief goods, LWF has also started “Kakuma premier league”, a soccer competition for boys and girls from the camp and the host communities, and “Kakuma got talent”, a talent show where young people can develop and demonstrate their skills in arts, music and performance.